If you are new to BAD, this is an update I post every Friday. On the Monday after the week is over, I post my actual numbers. This helps me stay accountable and get the best guidance from the BAD community.

These are my anticipated income and spending numbers for this coming week:

I don’t think much of this needs explanation but maybe a few do:


In exciting news, my parents will arrive next weekend for a visit. Their visit will coincide with a family wedding so it should be a good time.

My mom and sister will fly in and my dad will drive up a week or so later to take my mom home. (My sister will travel on to another city to visit friends after getting my mom here and see us a couple of days.) We didn’t anticipate my mom still being able to travel, but are excited for their visit.

An Update on Gymnast’ Activity Choice

We have had a tumultuous year with Gymnast. I don’t know if it’s the teen/puberty hormones, the move or just pure boy-ness. But this mama has struggled!

I have always said he was my “high-maintenance” child. I’ve also said he hit the terrible 2’s at 18 months and I’m still waiting for them to end.

Recently, a post on a single mom’s Facebook group made me realize that a lot of parents suffer in silence with just various challenges and insecurities when it comes to parenting. It’s too bad they don’t send you home from the hospital with this cute little baby and a manual!

Now don’t get me wrong. I love Gymnast and am super proud of him. But he challenges me at every single turn, all the time, it is never ceasing! I’m not going to throw out all the labels people have given me over the years, but I’m sure there are parents here who can relate.

I say all this to give you some background on what I’m sure will be another controversial choice I’ve made for him.

Gymnast was recruited to a competitive gymnastics team several months before his 6th birthday. This would have been his 7th year competing and he was slated to move up to Level 8 (Level 10 is the highest level, think college and Olympics.) He is very good.

But his training and competition has cost me a pretty penny over the years. Even though I was able to barter for a number of years for the training costs, travel and competition and uniforms, they add up.

After a really rough semester of public school, I made the parenting and financial decision to pull him from gymnastics at the end of last competition season. You can read about it here.

All summer, he pleaded and begged to return. And frankly, it turned my stomach to have made the choice, but I KNEW as a parent I needed to stick to my guns. Fast forward 3 months, and he returned from a month long visit to his grandparents. Still anxious to return to the gym.

I had pleaded with him to try a school sport, try a team sport, trying anything else that was local. He needs the energy and physical outlet (see high maintenance above.) But he was not interested at all.

We compromised at the beginning of August. I would agree to 1x a week back at the gym, he would agree to some behavioral and attitude adjustments and his coach agreed to call this a maintenance year and not require any competition. That cost me $100 per month, see the notes here.

School Spirit for the Win

This is Gymnast first semester in a school (previously homeschooled) during football season. The hype, the pep rallies, the “football” persona won him over. And he decided to try out football.  After my initial call with the coach, I told him, he could try for a week and then he would have to choose. Logistically I didn’t think he could do both.

But in fact, the football team has one day off a week AND the season ends the first or second week in October. And doesn’t practice again until sometime in the spring. That would leave me with a “activity-less” Gymnast. No physical outlet for his abundance of emotions and energy. That is NOT acceptable for any of us! 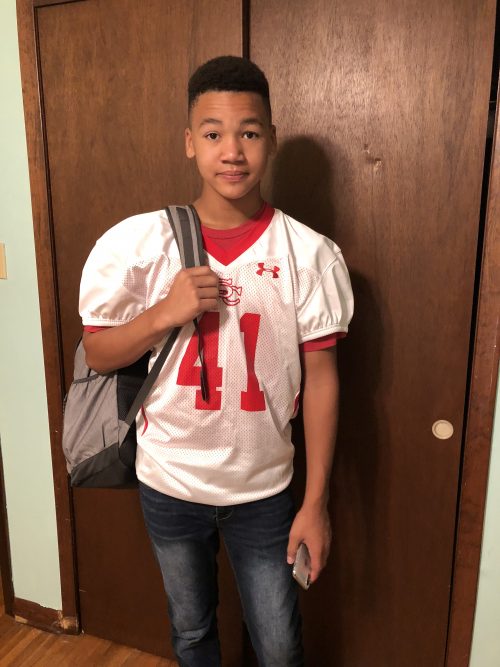 As a result, Gymnast is going to stay in gymnastics, going 1x per week. And he is going to play football. Well, he’ll have to earn playing time. And the learning curve will be steep seeing as he had never even seen a football game before attending last week’s middle school game.

But he will work out and be apart of the team. And we will see what happens. I had to invest in a pair of cleats and girdle for football, and my monthly cost for gymnastics remains $100.

(I will not attend football games unless the coach tells me he has earned playing time. So I’m not adding the cost of attending games to my budget at this point. Sorry, sitting in the heat, in a crowd is about as close to a nightmare as this introvert can think of. And yes, I realize that this is sacrilege in the football loving south. But I’m being honest.)

I realize many BAD readers disagree with my spending money on kids’ activities when I’m in debt. In reality, we have cut back tremendously! But eliminating them completely is just not worth it to me for a variety of reasons. Did/do you find some “extra” kid expenses to be non-negotiable even when climbing out of debt?