First I wanted to apologize to everyone for this weeks worth of posts from me.  I am so used to writing those kinds of posts on all of my blogs that it seemed right.  One thing I am not used to is writing about myself personally.  I did tidbits here and there, but nothing on a regular basis.  Hopefully you will accept my apologies and we will go from there.

Today is my son’s actual birthday party.  What we do is on their actual birthday, we have the grandparents come over and we just have cake and ice cream.  Then a few weeks later we have a birthday party for the child, on a weekend that we have both.  We are going to be changing this up starting next year though, and on their actual birthday, it will just be the four of us doing something special.  For both of my son’s birthday parties, my in-laws decided that camping was more important then their grandson’s birthday party.  Last year was forgivable, because they had the trip planned for a few months.  This year however they decided on either Monday or Tuesday that they were going.  This totally gets me rattled up.  Besides knowing the fact it was also Easter and on Monday my mother-in-law was supposed to take my wife to a doctor’s appointment.  I had to switch around my schedule to be able to take my wife now, which isn’t that much of a problem.  But when we went there two weeks ago, the doctor’s kicked both my son and I out of the office, because my son was being “too loud.”

Ok sorry rant over, I will be posting an update on my son’s birthday party on Tuesday.  I have some juicy frugal details, plus some not so frugal moments, that deserve a whole post to itself.

As everyone knows Sunday is Easter, and I am a little sad this holiday.  We didn’t get my children anything, besides a few pieces of candy.  This is a first for us.  Here is what their baskets looked like last year. 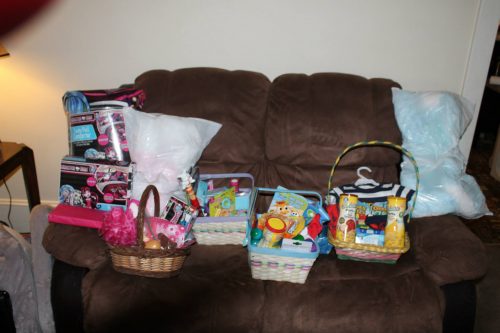 I feel bad about this, but know that they really don’t need anything this year, and it seems that they both are becoming a little ungrateful.  The daughter, she is always like is this it?  Then she doesn’t even play with anything.  The son will play with everything he gets which is a good thing, and he is too young to really understand gratefulness.  But what makes me really sad, is that we didn’t get them new easter outfits and they didn’t sit a get their pictures taken with the easter bunny.  We have a picture of every season with either Santa or the Easter Bunny.  But the wife and I made the decision that no pictures till the family picture in November.

A few people asked how the Amazon business is going, I am happy to say that I am in the black.  I sold six of my multipacks for a gross profit of almost $99.  Now it did cost me $85 to buy the product and ship it off to three different Amazon Fulfillment Centers.  So I technically only netted about $14 so far.  But there is still tons of product at Amazon and it is nothing but profit from here on out.  This tells me this is a viable option to make money, so I might throw more business income at this and see where it goes.

Some other people don’t feel like I am that committed to getting out of debt enough.  Haters are going to hate, and I am used to that.  Every time I posted something about my debt this happened, and well I am not going to let it get me down.  I will do my budget the way I want to and what works for me.  I am always open for discussion on everything, but to tell someone they are doing it wrong and become a little nasty about it, well is there a right or wrong way to get out of debt?  In my mind there isn’t.  Yes, I am not looking to picking up a full time job, for I rather spend time with my family.  Yes, I am not going to tell my wife she has to quit smoking, for that is up to her to make.  But is it the wrong way to get out of debt?  Not at all, it might take longer, but I will still make headway.

With that said, I have taken on somethings.  I actually applied to two long term contracts, that will contract me out for two days for about a month and a half.  One would start in two weeks and contract me out Friday and Saturday.  Then the other would start right after that and contract me out for a Saturday and Sunday.  I don’t see a reason for me not to get these positions, for I contracted myself with this company a few times in the past.  But what I am really excited about is that a big time internet marketer posted that he is looking to hire some people under him for about 12-20 hours a weeks.  The pay is average for this kind of entry level position, but to be honest I would have done this for free, to be able to study under him.

I also realize that I have a S#!t ton of stuff again, so I will probably be hosting another yard sale again.  Someone here asked me to give a link to one of my current blogs, as I don’t feel comfortable doing this, I want to point everyone to a blog that I no longer do, but had somethings that deal with what I currently do to save money, and sometimes even make money.  I will be linking to the kind of money I made in 2012 from a yard sale.  Maybe read it and come back here and comment if you have some tips.

Well I think that is about it.