For those who celebrate, I hope you had a great Easter yesterday! It was the first year that the girls really got it on their own. In the past, we’ve held hands and more-or-less led them to eggs, coaxing them to pick them up and place in their baskets, etc. Not this year. We went to our neighborhood’s egg hunt and as soon as they gave the command, the girls RAN to get eggs. It brought me so much joy to watch their excitement, but it also made picture-taking a bit challenging since I could only get shots of their backs as they RAN away to find more eggs. : ) 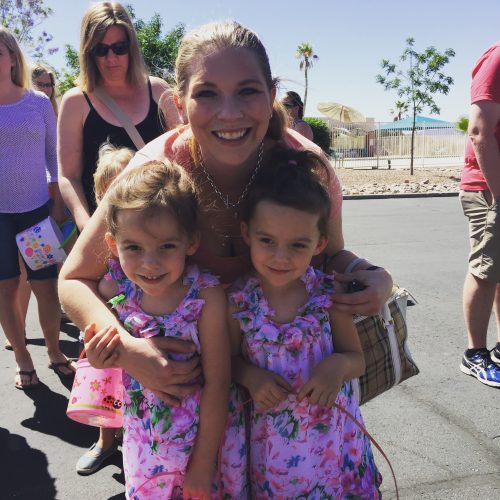 This was our “before” shot. Excuse my wild hair fly-aways! It hit 90 degrees that day so I had to throw my hair into an unplanned pony – it was too hot to keep down!!!

I know I’m late this year, but I wanted to share one of the Easter crafts we made that we sent to family. We have a long history of mailing kid crafts in lieu of “real” gifts for many different holidays (e.g., Mother’s Day, Valentine’s Day, Easter, etc. – see my Year-in-Review posts for links to various crafts: 2015 and 2016). This year was no different. Here’s one of the crafts we made to send out to loved ones: 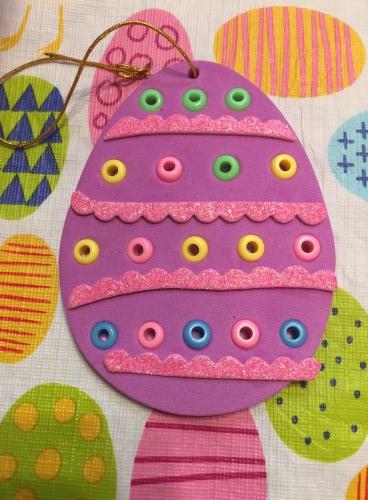 We got some kid’s crafts from Michael’s for 50% off (I LOVE that they do sales PRIOR to the holiday and not just as a clearance after the holiday has passed). There was one day during Spring Break that we’d gone in and just happened to be there during a kid craft hour. The girls were able to make two crafts (one was a painting on actual canvas, the other was a whole Spring Break scrapbook that was absolutely adorable). The class only cost $2 per child, and killed a solid 2 hours worth of time (= WIN!!) and then I picked up a couple Easter crafts to take home (which was the whole point of our trip). The girls LOVED the crafts (both in-store and the ones we bought to take home), and with the 50% off sale, the crafts only cost $2.50/each (we bought two different craft packages:  the egg pictured above, and a bunny rabbit craft, unpictured – both packages came with enough to make 2).

We mailed the crafts out about a week or so ago and when we made the rounds of phone calls to family to wish everyone a Happy Easter, the great-grandmas were tickled pink over the little crafts they’d received. Each boasting about where theirs was hung or displayed. It was pretty sweet.

I hope everyone had a great weekend! Have a great start to your Monday!

Sorry I’ve been a bit quiet over here lately. Last week was a tough one. The girls missed two days of preschool due to illness (the frequency of illness this Spring has been crazy!), then I got sick, throw in some Dad-related drama and by Sunday night I was just barely keeping it together. I’ve written a whole post in my head about Easter and now here we are 2 weeks later, my phone seems to have swallowed our pictures (not really, I can see them on the phone…but they will NOT send when I’ve tried to email them to myself and I’m having some upload error when I’ve tried to manually plug-in to my computer.) So…I’m giving up on it at this point. You have to know when to pick your battles, right? ; )  Cliff’s Note version of the post:  I  saved free stuff we got from our neighborhood & church Easter egg hunts. On actual Easter I didn’t have to buy a single thing. I re-used eggs, re-distributed candy (they don’t need much anyway), and filled in some empty eggs with pennies. We had 60+ eggs total and baskets were overflowing. We did dye easter eggs (using food coloring – no store-purchased dying set), but the extra dozen eggs were literally the only thing I had to buy! The grandparents both sent little Easter packages so the girls did get some new stuff (stuffed bunnies, sunglasses, a couple outfits), but hubs and I spent zero out-of-pocket and we still had a fabulous Easter! It can be done frugally, folks!

Moving on….(and, sorry there was no photo to accompany that. Like I said, I have to give up and move on at this point)….

Has anyone ever heard of the app, Wish?

It’s an app you can download and shop for cheap stuff on your phone. All of the items are coming from overseas (I believe they’re all Chinese manufacturers). The app essentially gets rid of the middle-man and puts consumers directly in touch with the manufacturers. Because of this, you can get stuff for pennies compared to store-bought stuff. According to this article, this is the first ever site that was designed specifically for people to shop through the app. No need to use a bulky computer or go to a phyiscal store. The shopping process really couldn’t be easier.

I’ve actually been using Wish for a few weeks to buy random things here and there for our cruise. Check out these adorable swimsuits I bought for the girls: 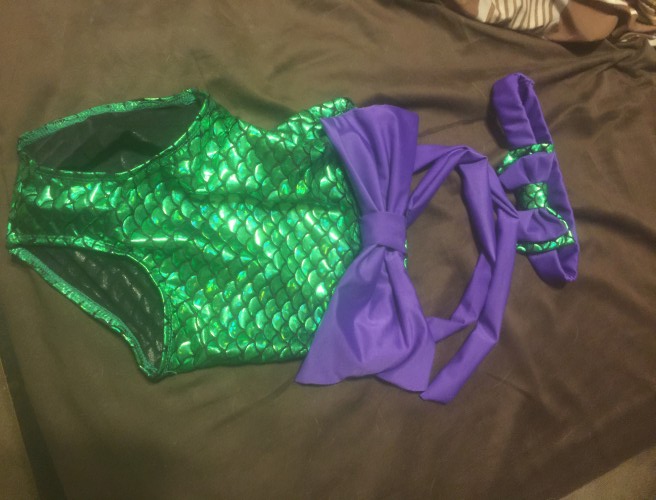 (don’t ask me why i could get this photo and not the Easter ones. I don’t know)

They do have some down-sides. The big one is that the sizing is pretty consistently off. Everything is a bit smaller than standard American sizes, so I’ve always ordered up a size. The shipping takes awhile, too, up to 2-3 weeks.

But that being said, I’ve been receiving crazy compliments on everything I’ve gotten so far. It’s cute stuff and for CHEAP!

I hesitated to even share anything about this app with you guys. The main thing is that I was worried it was totally exploiting children labor and I didn’t want to contribute to that or suggest anyone else do so either. But my understanding from doing a bit of research is that the Wish app vets out the different manufacturers and will drop people who do not conform to the app standards. Admittedly, I don’t know that this is 100%, as I’ve seen some knock-off Polo or other name-brand items and I can’t be sure what’s going on at the manufacturing-level. But the app represents these places as the same types of places who sell to American stores already. The only difference is you don’t have to pay the mark-up because you get the item directly from them. So that puts my mind a little bit more at ease.

I want to be 100% up front that this post is not sponsored, nor have I received any type of compensation for this post. Actually, they have no idea that I even blog here. I’m just passing it along because I’ve been so impressed with the app. If you have the time to spare and are okay with ordering things without trying them on (and, read the reviews! They’ll help guide your sizing decisions), then this is a great way to save serious money! I think it’s on-par with second-hand prices, only you’re getting brand new stuff that’s really cute and fashionable.

You’ll see a mention about Wish in my next budget update (coming soon – probably Friday) because I’ve bought some clothes from there that will be appearing in the clothing line-item of my budget.

Let me know what you think if you use Wish.

Are there any other really cheap direct-to-buyer apps I need to know about?