If you missed my post earlier this week, I announced the exciting news that we are officially consumer debt-free! YAAAAAAAAAAAY!!!! (insert happy dance emoticon)

What’s funny is almost immediately after making the final payment on the car….it broke. Ha!

A bit of euphemism. It didn’t break down. Just a piece of it broke off. Check this out. 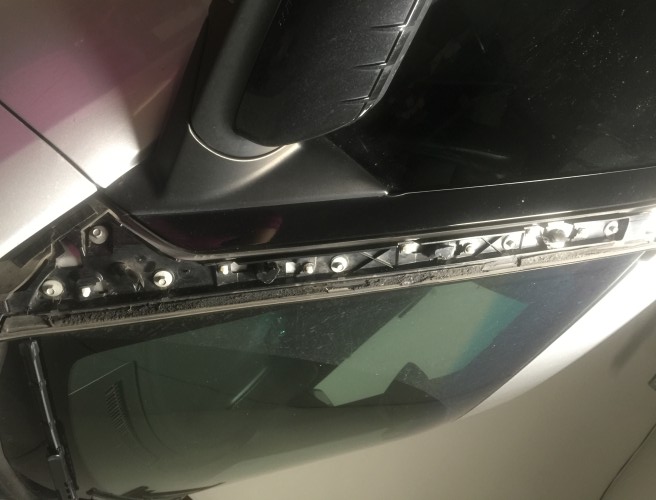 Nothing even happened to cause it to break! I was just driving down the road to get to work, minding my own business, when out of the corner of my eye I saw a piece of our car just flapping in the wind! I immediately exited the highway but on the exit ramp the piece fully fell off and broke into several pieces.

Hubs looked it up and thinks he can get the part for relatively cheap ($100ish) and do the install himself. So all is well, just kind of funny that the second it becomes OURS….it breaks. Ha!

At any rate, I’ve had a couple people comment and ask what’s next now that the car is finally paid in full.

It’s tough because #1) I’d love to start punching Navient in the face, taking out loans left and right, and #2) I have a relatively small balance transfer loan (just over $2100) from what was originally a student loan that I’d love to pay off next month.

I’m trying to use my head and not just my heart (which says to start stomping the student loans NOW), and make our first priority re-building our emergency fund.

If you don’t remember, our EF was slowly whittled away the second part of 2015. As was our “living on last month’s income” fund. Hubs’ business wasn’t doing so hot in 2015, so whenever I needed that extra little boost for paying debts, I’d “borrow” here and there. First from the “last month’s income” fund, and then when hubs had a no income month I used our EF and, well, now we’re down to basically nada in either of those accounts (note:  not entirely true…we still have a few hundred in the EF, but not nearly what we’d like to have).

Starting in February, we’ll begin chipping away at items #1 and #2. We’ll still be paying toward debt, too, of course. But we’ll be doing so at a much less aggressive rate as we, instead, try to restock some money in the bank.

The plan is to put nearly $2,000 a month into savings. This will be $1250/month toward the house down payment fund (our goal is to buy by the end of summer, so we need to save heavily the first half of the year), and another $500/month into our dedicated Emergency Fund.

It’s going to be tough. That’s a pretty aggressive rate of savings and debt payment. We’re talking about $3500/month between the two, which is more than what our average monthly debt payments were last year (see here for a quick-view breakdown of the majority of last year).

But when you have something so meaningful that you’re working toward, it definitely helps put the fire under your pants. That, plus this will be our first full year both working full-time (and I still have the part-time job, too). It’s just going to be astronomical earnings compared to 2 years ago. Even compared to the first half of last year. So I think we can do it.

The first half of the year will, admittedly, be a little heavy on the savings side of things. Then the second half of the year we’ll make up some ground and really start making some good headway with the student loan debt.

But it won’t be all savings and no debt until then! It wouldn’t make sense to blog for a getting out of debt blog if I wasn’t actively working on the debt!

I’ve got a few tricks up my sleeve to try to make some good progress even while in savings mode! I’ve GOT to have the balance transfer student loan paid in fully by April (that’s when the interest sky rockets from 0% to 13%!!!) But right now my projections show it being paid in full by March. Then I plan to initiate a second balance transfer to do it all over again (they still have the deal with 0% APR for a year, and only a 2% initiation fee; this is half the initiation fee of other offers I’ve received).

I also may consider some type of consolidation program a little bit down the road. I like having my loans separated currently because it gives me a big psychological boost every time I pay off one of the loans (and I target them one-by-one, paying minimums on all others). However, I hate Navient with such a fiery passion that it may be worth it to consolidate with an outside company just to get them out of my life. We’ll see. I’m not jumping on anything now, but keeping my mind open to the possibility down the road.

Anyway, that’s it for now. I just wanted to dedicate a post to the question I’ve been seeing, “What’s next?”

Also…counting down the days until the all-cash paid Cruise 2016 vacation in April! We’ve been planning and saving for it since February 2015 (over a year!!!), so we’re beyond ready! I can’t wait! Whoever said you can’t have a little bit of fun while in debt-repayment mode certainly never read here! It may be a controversial stance, but I’m a believer in balance in life. We’ve worked HARD the past two years to dig ourselves out of the giant debt hole we were stuck in. Yes, we have a long way to go. But it’s precisely because this is a MARATHON (and not a sprint) that I think it makes sense to build some fun into the budget. Otherwise it’d just be impossible to stick to for so long! That’s my view on the matter.

What are your plans once you get out of consumer debt? Tackle student loans? Your mortgage? Get your savings up to snuff? Or are you going to go beyond? Perhaps save enough to retire early? Do some traveling, etc? I’d love to hear YOUR plans!