Want to know how we work our budget magic?

1) We found a method that worked for us.

We were originally inspired by the Dave Ramsey method. The envelope system was the reason we became debt free the first time. It was also the reason we went back into debt. It was simply too much of a hassle and we never had the right envelope when we needed it. Chris would have the grocery envelope and which meant I couldn’t stop at the grocery store if it happened to be more convenient that week. Same with gas money. Sometimes we’d drive my car more, sometimes his. We tried splitting the cash between the two of us but someone was always short which meant we pulled out the debit card (and eventually the credit card) and ended up spending money committed to something else. It was a hot mess.
We’re starting our seventh year of using YNAB as our budget software. We went through quite a few methods that didn’t stick but after years of searching, we found one that fit us. I’ve recommended YNAB to lots of folks. That said, it might not be the best fit for you. The best fit for you is the one you can stick with. If you haven’t found your method yet, try try try again until you do. Envelopes? YNAB? Every Dollar? Calendars? I don’t know! Try them all! Recognize that as your life changes, your method might change too.

2) We budget together every month.

Oh Lord. You know there were some nasty fights. It took us about a year to settle before it became comfortable. A YEAR. We start by reviewing the spending from the previous month which is always eye opening. There is no chance to hide anything because we both know we will look at it together at the end of the month.
Once we finish reviewing spending from the previous month, we budget for the next month. Since we are on a single income from a corporate source, it’s nearly the same to the penny each month. Chris is able to pull in occasional construction side hustles but we don’t budget any of that money until it actually hits his account. This month, we were hit with two unexpected expenses. Our impound account was off by $270 and we had a dental bill for $55. We struggled to figure out what categories should suffer to pay those bills. After some tweaking, we were able to shake it out. Thank goodness February is a short month!
We review the budget top to bottom again to make sure we didn’t forget anything and we call it good. Thanks to those bills, this month is the tightest we’ve had since Chris started staying home with the kids. I smiled, looked at him and said, ‘We got this!’ He grabbed me into a hug and kissed me. Yeah, cheese factor was at 900%. Don’t get me wrong, it doesn’t always end in glitter and rainbows but most of the time… it does. It took us a LONG time to get there.
We check on the budget throughout the month. If you don’t, it’ll turn sideways in a hurry. By the end of the month, Chris will usually call to say something like, ‘We’ve got $77 left in the grocery budget, do you need anything or am I good to spend the rest?’ Let me be clear, neither of us asks ‘permission’ to spend, we simply communicate before emptying a budget line item.

We were searching to find a budget method that worked for us and somewhere along the way, our marriage grew stronger.

A Reason Not to Buy a House

I believe it was last fall or late summer I mentioned that my landlord would like to sell the house we are living in. Not necessarily, that he wants to sell it out from under us, but he has asked me to purchase it on several occasions.

As anyone who has read me here knows, I am no where close to the position to buy a house. But that’s not to say, the idea hasn’t tempted me off and on throughout the years. We’ve now lived in this house for 3 years (come April.) That’s almost the longest we have lived anywhere. In fact, when Princess graduates next year, we will have lived in this house longer then we/I have ever lived in one place. (I had moved 18 times before I graduated from college. And Princess, Gymnast and I have moved 11 times since their dad and I split 13 years ago.)

But as often as I’ve thought it would be nice to own a home. Even considered owning the home we are in now. I realize the still precarious financial position. Know the benefits of renting…no maintenance or major upkeep costs. And more importantly, am well aware that I may not want to stay in this tiny town forever, ie after Princess graduates.

With all that being said, I have another very good reason for not buying this particular house… 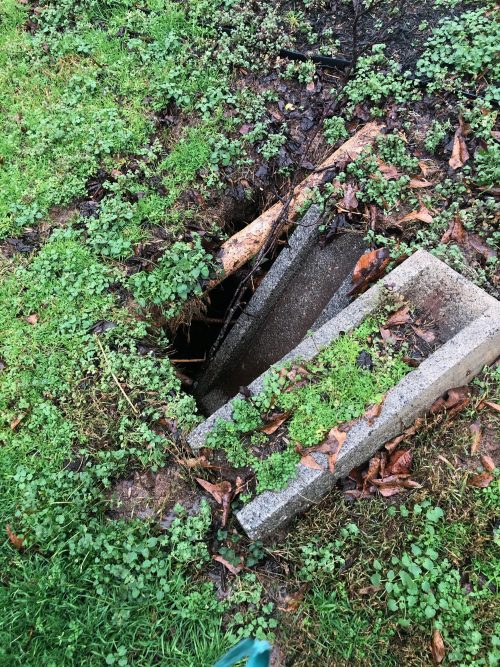 It has been raining like crazy the last week or so. Roads around us have been washed out. School was delayed and closed because of flooding and so on. But in our own yard, we now have a raging underground river running.

And the yard fell in…we have known about this hole (as has the landlord) since we moved in. We covered it with these two concrete water drainage things. But they are now falling in…can you say Sink Hole?

No, really I don’t know if this is how sink holes are created. But I do know that digging up the yard, dealing with the drainage issues and so on will be very expensive and way outside of my area of expertise.

I’ve always said that sometimes I need a “frying pan” to the head to learn my lesson sometimes. This time it just took a large hole in the ground. (We actually filmed the hole and you can see the fast moving water inside.)

But this alone makes is really easy to dismiss any wandering thoughts I have about buying this house. So just praying he doesn’t decided to sell for at least the next year and a half. Then we are good!