My kids have Spring Break this week (yes, apparently even preschoolers are out), so I’ve been spending a lot of time with them this week and soaking up every moment since I haven’t had so much one-on-one time since I started back to work full-time. I’m lucky that it’s also my university’s Spring Break so I’m not expected to be on campus (I’m told that the syncing up of the Spring Breaks is super rare so I should be extra grateful that it worked out this way!)

This morning started out with some green chocolate chip pancakes in celebration of St. Pat’s 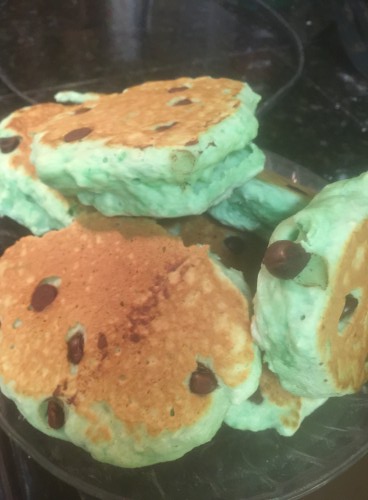 followed by some painting. The girls worked on their rainbows and we talked about leprechauns and the pot of gold at the end of the rainbow, etc. 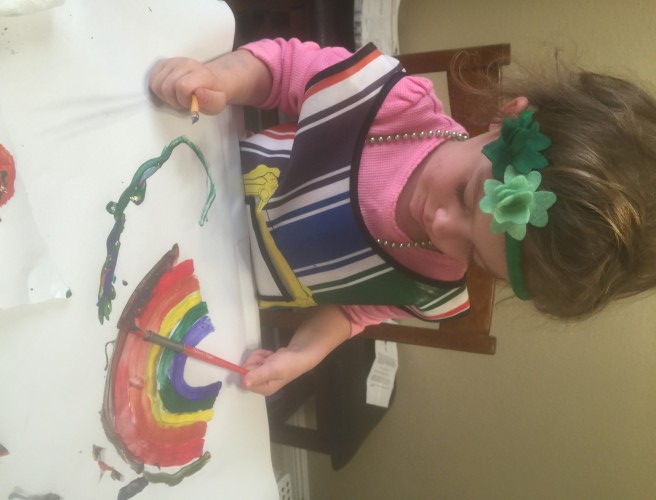 Truth be told, though, this week has been HORRIFIC. Seriously, one of the worst of my life. I’ve mentioned before about how, with my Dad’s dementia, we’ve had a couple minor emergencies before. This week we experienced one that took the cake and is going to cause some drastic changes to our lives.

In a nutshell….due to my Dad’s bizarre behavior (a classic symptom of his FTD), someone in the medical field thought he was suffering psychosis. They involuntarily admitted him to an absolute hell-hole state ran mental health facility. He was there for 3 days before we even knew where he was. When we finally found out his whereabouts it was through another patient’s family (meaning, no one from the facility EVER tried to contact us). There were various hang-ups and red tape to prove that the man does NOT have mental illness but, instead, has a rare form of dementia. In all, he spent 6 days in the facility. During this time he never once was allowed to shower or change his clothes, he was only fed at odd intervals, and he was doped up on all kinds of drugs (not to mention he was NOT receiving his prescribed medication which he is supposed to receive daily).

When my sister was finally able to free him from his prison (yes, it felt like a straight jail), he had THESE MARKS all over his body. Not just his arms, but across his back as well. We thought they were restraint marks…but on his back? The best part? He has NO RECOLLECTION of how they occurred. None. This is not from the dementia, folks. He hasn’t just lost full days and events at this point yet. That’s due to being doped up on something.

We took him immediately to a doctor who documented all the injuries and ran a full chem panel (still awaiting results). We’ve reported the facility to the appropriate powers that be and are seeking legal counsel. To say it’s been a nightmare is a major understatement.

My brother is flying to Utah next week to meet a realtor, do some housework, and get the Utah home on the market. But now we’re faced with moving my Dad immediately to an assisted living facility where he has more oversight. He would still be safe living alone otherwise, but since his bizarre behaviors can be misinterpreted as psychotic episodes, we do NOT want to experience any other similar situations. Having him live somewhere where the staff is aware of his limitations and can help protect him is vital. We’re heartbroken over what he’s experienced and it has been a major setback to his functioning.

So there are more financial implications to come. Retaining counsel, possible lawsuit, selling the second property, and placing him in an assisted living. Lots of money flying around. It’s a very scary thing. I’ve mentioned before that he had done a decent job of saving for his retirement, but money can go QUICKLY when you’re dealing with lawyers or paying $7k/month for assisted living. We’re definitely nervous about all that, but also feel a moral obligation (not just to our father, but for other patients of this facility) to hold them accountable for what they’re doing to others. I won’t say the name of the place, but from reading their Google reviews, Yelp reviews, and Facebook reviews, we are not alone. Every single review was one-star. Every single review had a horrific story attached. It makes me feel sick to my stomach.

So that’s what I’ve been up to this week. Plus trying to sneak in some work time here and there. The cruise is coming up quickly and I really need to get ahead so I can be away for a week and have everything set to run on auto-pilot. Wish me luck!