Sooooo, THIS happened over the weekend. 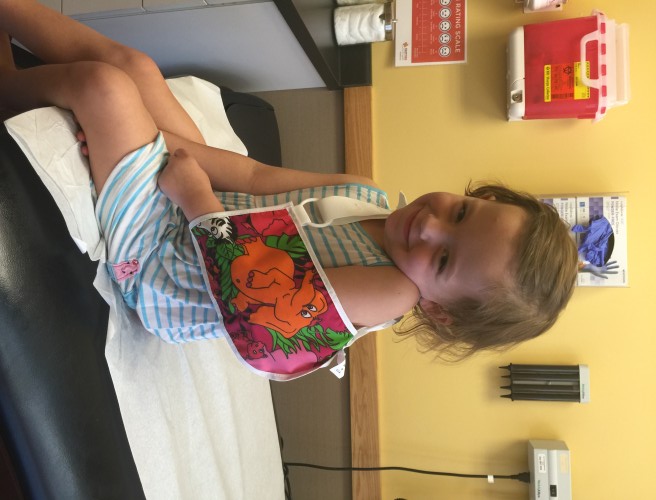 If you ask the girls the story of what happened, here’s what you will hear:

Bailey:  Brooke pushed me off the giraffe!!!

Brooke: NO! I pushed her off the giraffe!!!!

We do have a stuffed giraffe chair animal thing (if you’re curious for reference, it’s similar to this one, but way cheaper. Ours was like $20 from Walmart 2 years ago). But I still have no idea how being pushed off of a chair that is located on the floor – the seat no more than 6 inches above the ground – could cause an injury. No idea. But somehow, my offspring found a way.

The injury actually occurred on Friday night when they were supposed to be in bed, but were actually up rough-housing (hey – go figure – you do something you’re not supposed to and you end up getting hurt! Tough lesson to learn, kiddo!).  I checked Bailey’s arm and she was able to move everything so I just made her go back to bed.

If you recall from the end of this post, we had a jam-packed schedule last weekend! Saturday morning we got up and met our friends at the local splash pad. It was there I noticed Bailey still was not using her arm – like, at all.  The splash pad is adjacent to a little playground and when the kids decided to go play on the playground it became painfully obvious that Bailey still had a problem. She couldn’t climb the ladder to get up to the top of the playscape. If anything, her arm seemed to be doing worse. She was holding it into her body and not using it at all. I called our playdate quits early and headed home to change out of swimsuits and immediately headed over to urgent care. I was pretty sure nothing was broken, but I thought it was possible she had a fracture or bad sprain or something and decided the injury justified medical attention.

We were at the urgent care for 3 hours (ugh!!!) and in the end, the doctor recommended against an x-ray. His rationale was that we don’t want to expose a young child to unnecessary radiation, and since we were pretty sure nothing was broken, the course of action for most of the remaining possibilities (strain, pulled muscle, bruised bone) would be the same:  a sling!

So he hooked Bailey up with a super-cool kids-sized sling and sent us on our way with instructions to keep a close eye on it and that if things hadn’t resolved within a week, that we should come back (or go to our primary care at that point).

Bailey was an excellent patient and has actually really enjoyed her sling. Within just the past couple days she’s already regained quite a bit of mobility. The arm is still sore and she needs some additional help with certain things (e.g., getting dressed has been hard one-handed), but she’s already on the mend.

Unfortunately, the injury basically blew all of the rest of our weekend plans!! Our preschool did their bi-annual Parent’s Night Out on Saturday evening, but at that point Bailey was still having a tough time even feeding herself and going to the bathroom (pulling down pants, getting toilet paper) and I just didn’t feel good about dropping them off with a ton of other kids and taking off for date night. Probably would’ve been okay if it was a babysitter in our own home, but the fact it would be a bunch of kids, etc. I just didn’t feel good about it.

And on Sunday we were supposed to go to another child’s birthday party, but the party was supposed to be at a local indoor trampoline park. That also seemed like a pretty bad idea for a child with an injured arm. We’ve been once before (for another party), and I knew that falling down was inevitable. No big deal most of the time, but I didn’t want to chance her falling on her arm, or falling and trying to instinctively catch herself with her hurt arm, etc. So that was that.

Our big, fun weekend plans turned into 3 hours at Urgent Care and spending the rest of the weekend taking it easy at the house. I like relaxing and taking it easy with the best of them, but it was a bit disappointing given our excitement over all the fun!

Soooooo, so much for our original plans. Isn’t that just life for ya?  I’m just thankful it wasn’t worse. I’m also thankful for health insurance and our flexible spending account with plenty of money in it to cover this expense. They didn’t charge us anything at the time (said they’d bill insurance), but I know we haven’t quite hit our deductible yet so I’m expecting a bill at some point. That being said, this incident might be enough to tip us over into having our deductible fully paid, which would be nice. So we’ll see what the financial implications are. Either way, I know we’ll be fine. I love that peace of mind!

My sister had to take my mom to Urgent Care yesterday (lest dad be ever so lonely in having health concerns). I called to ask if they needed company while they waited for test results and they declined but asked if I wouldn’t mind stopping to pick up my six year old nephew who was sitting with them at the hospital.

I loaded my nephew into the back of my car and about 15 minutes into our traffic jammed commute, he started crying. 15 minutes after that, he was sobbing. Sure I understand. Grandma is in the hospital, mom is busy, it’s scary, and he’s tired but…

I have absolutely no idea what to do with a crying kid.

You’d think I’d be experienced at this since I’ve got 11 nieces and nephews, but crying in traffic? No clue.

I gave him my iPod which kept him entertained for 10 minutes, until the battery died. After that, more crying.

We sat in traffic for another 40 minutes until my gas light blinked on. “I’m sorry buddy. I’ve got to stop for gas. We’ll be home soon OK?”

“Can I get candy in the gas store?” he whispered.

“Sure buddy. Anything you want.”

“Can I get TWO candies?” he asked, the tears drying in his excitement.

“Possibly cause diabetes? Contribute to childhood obesity? Sure. Why not?” I replied.

“How about a large soda too?” he asked.

I was willing to buy part ownership in Shell gas station if that’s what it took to make him stop crying.

He picked out the two largest bags of candy, filled up a soda cup the size of his head, and off we went to sit in traffic again. There wasn’t a single tear the rest of the way home and I got a huge ‘Thanks Auntie Beks!!’ with a hug before he left (I didn’t mention the sugar overload to my sister – I value my life far too much).

I can say no to myself all day long but to kids? I’m putty. If this experience is any indication of my future financial and health dealings with my own children… I’m dead.