You Know the Saying…We Plan and

God laughs. That has been so true for me the last week! I let the last couple of posts publish because I wanted to document how I thought my life was going to go. (I typically write about a week in advance.)

But let me tell you…that is NOT how life has gone!

Sea Cadet is Back in the House

His plans to move out fell apart a little over a week ago. He called the guy he had plans to move in with only to learn that his girlfriend and children had moved in so there was no more room available.  So he blew the money he had saved to move out, knowing he would just come home.

He didn’t have anything but the gas money to come home when his duties at camp ended and a paycheck due next week. And then as he attempted to leave, his car wouldn’t start. Thankfully, after a little while of panicking he did determine he just needed a new battery. (Which is what I told him when he called.)

I let him put the new battery on my credit card, all three of the kids are authorized users and have their own cards. He will be paying me back for the battery and his rent when his paycheck arrives this coming week. But ugh!

Gymnast has Moved In

Gymnast has decided to finish out his last three years of high school here. His dad and I left it up to him (for better or worse as we couldn’t agree on anything) to decide. (Broken families really suck, especially for the kids!) As a result, I had to buy another bed and a few bedroom accessories. (When Beauty moved in, she took his old bed. It had already been living in Princess’ room as we didn’t really have anywhere to store it.) 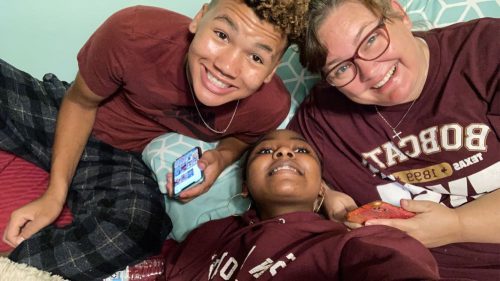 Gymnast, Beauty and I hanging out. We didn’t plan to coordinate our shirts, we just did!

So several hundred dollars later, he has a bed and his room furnished. History Buff moved out of the little room and back into the living room with Sea Cadet. We just finished rearranging that room to make it a bedroom for the twins instead of a living room/Sea Cadet’s room. It’s a little crowded as most of the living room furniture had to remain as we have no where else to put it.

But moving on to what was the biggest shock to me and perhaps the one with the most financial repercussions.

Without a lot of forethought or even time to decide, Princess is returning to the public school she left. I left the decision up to her after some very heartfelt, tearful conversations. Taking into consideration what it would be on all fronts. She wants to return.

So Thursday afternoon of last week, I got her registered. For the first time ever, my two biological kids will attend the same school. And I think they are both a little excited about it, and frankly, I am too. Even though they are only a year apart in age, they are two grades apart due to Princess skipping a grade when she transitioned from homeschooling to public school. So this really is the only opportunity for this to happen. 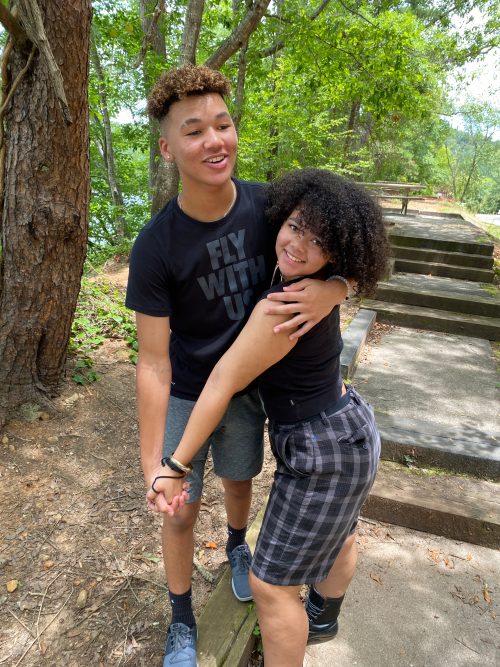 Gymnast leaving was hard on all of us. It was devastating to some of us. But I hope and pray that this year back together again will help heal some wounds.

There were some other factors which will remain private. But she is very happy with her decision and I have decided that no matter what my feelings or thoughts on it, I want her to have a successful and fun senior year. I believe she has made the right choice looking at the broader picture, especially in these uncertain times.

So all three of my high-schoolers return to school next week, as of today, at least. I spent about $10 on basic school supplies (paper, notebooks, pens and pencils,) bought about $300 worth of back to school clothes and do not have to think about car stuff as they will all be able to ride together! Woot, woot!

Now I am just waiting to hear about getting a refund on the tuition I have already paid. Per their policies, I should be able to get it all back. That’s $2,600 that I’ll have to go toward debt. (But I’m not sure how long that will take so just waiting to hear.)

As we end the last month of summer, we are tightening our belts again. And heading into a no or at least minimal spend month. Beauty and Gymnast start back to school within the week while Princess’ school has delayed their start date until the end of August.

I’m not sure what is going to be required as far as school supplies go so I’m staying a little flexible on that. Otherwise, we are planning for a typical no spend month…our groceries and household supplies are well stocked, we are as planned as we can be with the unknown of school and COVID-19 around us. I for one am ready to get back into the school routine…especially since I no longer have to drive kids to school on a regular basis!

And I am super excited about my debt update…I have been on it!!!

I even paid a bit more toward my student loan than I thought I would be able too. And it feels so good.

At the same time, I have been paying a bit here and there towards Princess’ tuition. I only have $400 more to pay and her entire senior year will be paid for. Woot, woot!

I’m still not clear on what “senior” expenses will look like, but I am confident that I have the savings to cover it in my slush fund so will not be including it in my ongoing budget any longer.

Sea Cadet will return from his summer as camp nurse in Virginia in the next couple of days. He still has his part time job here as an EMT for our local county. And anticipates having a full time firefighter/EMT job for the next county over within the month.

The hiring manager was his instructor during his EMT program. And plans to have an in-person interview before finalizing an offer. With that being said, Sea Cadet is planning to move out immediately. He will be moving into a spare bedroom in another firefighter’s home. This has been planned since early in the summer. We are all excited about this big step for him. (And yes, I am a bit relieved that we don’t have to squish one more person into this house.)

With Gymnast staying, the two girls and History Buff and I…let’s just say it’s a bit tight. (But we would make it work if we had too, we are good like that.)

History Buff has moved into the living room, giving up the small single room for Gymnast in anticipation of him moving out as soon as he finds a place/roommate situation. This was decided some time ago, if Gymnast was to return, and I didn’t want a big upheaval once school started.