The $5 Movie is Back

Thanks to COVID new move releases are few and far between. In fact, I think I saw an article where one of the bigger chains was considering closing its doors until the Spring of 2021 when the new blockbusters were slated to be released.

Our movie theater, about 30 minutes from us, just re-opened since shutting down last Spring. We have been to two movies.

And I’m excited to announced that the $5 movie is the standard. They are all re-runs from years past.

Big name actors and actresses in some of their first films. They all look like low budget films compared to today’s slick picks. But, oh, it’s been fun walking down memory lane. 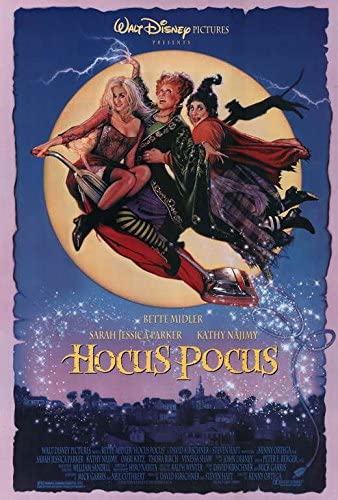 Gymnast and I went on a Friday night date last week to see Hocus Pocus. It was fun and really a nice break from life. But I was surprised to hear him say “I actually liked that movie” as we walked out.

Masks are required. Every other row is blocked off. And there are really very few movie goers, which isn’t much different here then in pre-COVID days.

I appreciate this unexpected benefit of COVID…lots of throwback movies in the theater and $5 tickets. It will not become a regular for us at this point…but an concessional break from life, yes please.

What about you? Are movies cheaper in your area? Other entertainment options become viable options?

When my husband turned 18, his parents took out credit in his name.  Their credit was in shambles and his was new but spotless.  They racked up $5,500 in credit card debt and $1,000 in cell phone bills.  My husband, wanting to help his struggling parents, paid the minimum payments for four years.  We married when he turned 22.  Suddenly we had rent, groceries, and utilities and he could no longer afford those minimum payments.  He asked his parents to start paying their debt.  A few days later, his father gave him a spreadsheet.  The spreadsheet outlined all the things they believed he owed them.  They decided he should have paid rent the day he turned 18 up until he moved out at 21.  They decided he should have paid a rental fee each time he borrowed their car and loads of other silly things they could think of.  Total everything up and not only did they not owe him, he owed THEM $1,000 by their estimation.  Not a single mention of the four years of minimum payments he had been paying for them or, crazy thing, the fact that rent or any of the other bogus charges were never discussed or agreed on.

That spreadsheet resulted in the biggest fight we’ve ever had in our marriage.  I declared it was hogwash and he said his parents had no money and the spreadsheet was what helped them sleep at night.  “We aren’t getting a dime from them anyway.  It’s water under the bridge.” (Before you roast him for saying that, remember, he was 22)

It took us four more years to pay that debt and some months, we couldn’t afford it at all.  My husband’s credit was completely destroyed.  Our home loan is in my name only because his credit was too terrible.  Our interest rate was insanely high because I didn’t make enough on my own for a decent rate.

It’s been nearly 20 years since this all happened.  We didn’t say a word to anyone in the family.  It was this weird secret my husband wanted to keep to protect his parents.  We thought our silence was OK.  It didn’t hurt anyone but us right?

I went to dinner with three of my sister-in-laws.  It was a great night, we all shared a bottle of wine and stories late into the night.  One of them is buying a house and we were lamenting about the process.  My husband and I had moved in with my parents for a short period to save a down payment and it was hard.  “At least they didn’t charge you back rent years later!” my sister-in-law said.  “Huh?” I asked.  “Oh!  Did I not tell you?!?  J’s mom and dad came after us for rent!” she exclaimed.  There was silence at the table.  “You too!?!” another sister-in-law exclaimed.  One by one, the stories came out.  His parents did the same thing to all their kids.  The weird secret we were all carrying.  My husband wasn’t the only one, he was just the first.

Later that night, I cried as I told my husband what happened.  We never said anything.  We didn’t protect his little brothers.  We just assumed it wouldn’t happen to anyone else but our silence hurt them.  Here’s the thing, I can be furious at his parents, and I am, but the weight of guilt that I’m now carrying is huge.  I’m furious at myself.

Money and family is a tough subject.  My husband has believed for years that he was protecting his parents’ reputation.  They were poor.  They needed money.  They didn’t know how else to get it.  It made sense…

Until we had kids.

“Chris, would you take out money in the names of our kids?  For any reason?  Would you watch them struggle under the weight of it?”  I asked.

He stared at the floor for a long time then answered, “I don’t think I could.”

It’s too late now.  All his siblings are grown.  All of us are adults with strong hands on our purse strings.  The secret is out.  We all know what happened.  It won’t happen again.  But it doesn’t fix my guilt.  I’m going to have to live with that.  I know my husband’s family isn’t the only one like this.  Perhaps if this happened to you, you’ll think about speaking up.  It could save a lot of hurt.