I’ve been working some hectic days lately.  Typically, the projects I run are limited to San Diego but the one I’m running now is nationwide.  I’m doing the project as a favor to a different branch of the company I work for, the branch I’m trying to get a remote job from.  Doing well on this project means I have a better shot at the job I want.  On it’s own, it would be fine but it’s on top of my day job and it’s not the only extra project I’m doing right now.  Suffice to say, I’m deep underwater.  I’m up with the sun and I work until I can’t keep my eyes open.

This means I’m completely useless at home.  My husband is teaching the older three kids kindergarten, 1st, and 3rd grades.  Our youngest has expressed a lot of interest in school as well and we don’t want to dissuade that desire so we’ve started preschool with him. We are still living on the road (though somewhat planted).  It’s difficult to meal plan with a tiny fridge and limited space.  My husband, who has always been supportive, has been schooling, planning, and cleaning while I type on my keyboard and ZOOM all day.

Before we knew it, we slammed full speed into December 24th and hadn’t bought a single gift yet.  Rather than boot up my computer, I finally put it away and we spent a gorgeous day with the kids.  We found a great little mom and pop toy shop and while I walked the kids down the street to admire decorations, hubby quickly bought a couple things for the kids and buried them in the back of the truck.  We continued our tradition and ate Chinese food with the kids and watched Christmas movies late into the evening.  At 10pm, when the last of the kids had drifted off to sleep, my husband and I cracked open a bottle of wine and spent a solid 5 ½ minutes wrapping the few gifts then snuggled on the couch to watch Love Actually.  It was a beautiful day followed by a restless night.  The next day the kids would see my failure.

Christmas morning rolled in and I just knew the kids would be terribly disappointed. They’ll know we pinched pennies.  Their lists to Santa were miles long.  But… they screamed.  They squealed.  My son said it was ‘The Best Christmas Ever’ and enveloped me in a bear hug.  I love them so much.

At times, I forget to give myself grace.  This crazy schedule is temporary.  I can’t do everything.  One of these days, my kids will be disappointed with the gifts I give them.  It doesn’t mean I’m a bad mom.  It’s OK if everything doesn’t go right.  It’s life.  Show grace.

Thank you 2020 for not being a complete dumpster fire for me on Christmas. I hope 2020 ends in kindness for you as well.

*though technically, 2020 ain’t over yet so I probably shouldn’t count my chickens before they hatch! 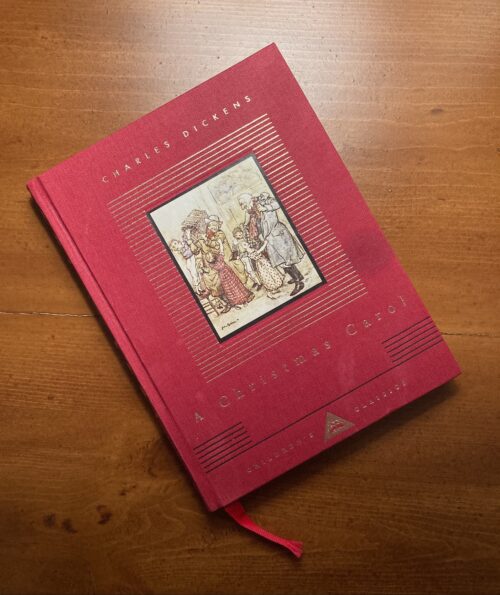 We have an annual tradition of reading or listening to Charles Dickens’s “A Christmas Carol.” As far as I knew as a kid, it was just a story starring Mickey Mouse and Scrooge McDuck. But as an adult I’ve become a big fan of the original story published in 1843. It’s well-written, short, and inspirational.

(We love the audiobook version read by Jim Dale. It’s so good. If you haven’t listened to anything he’s narrated, imma need you to go find some at the library. Stat.)

I didn’t know much about Dickens’s personal life or why he wrote this Christmas story until recently. What I learned was quite interesting: “A Christmas Carol” came about because of debt. And lots of it.

Apparently debt was a familiar companion to Dickens and his family. He grew up poor. His father was sent to a debtors’ prison when Charles was 12, and Charles was left to support his family by working in a miserable factory. Their family was always struggling to make ends meet.

Even as he became a well-known writer, he still had a hard time managing money. He spent more than he made. He accrued his own debts, and became responsible for his father’s debts too.

By 1843, a few of his novels had flopped and his fourth child was on the way. Desperate, he wrote what he called “a Ghost Story of Christmas” in a quick six weeks. It was published on December 16, sold out by Christmas Eve, and has been a Christmas favorite ever since.

If you know this Christmas classic, then you know money is a theme throughout. Scrooge loves it more than anything and anyone. He’s greedy, cheap, and selfish—the ultimate miser. He ignores the poor and rolls his eyes at any sort of joy. One Christmas Eve he’s shown his past, present, and future, and learns that he’s horribly off-target with his business-centric life. Mankind is his business. Charity, mercy, and kindness mean far more than his money.

“A Christmas Carol” saved Dickens that season, but unfortunately it didn’t solve all his money problems. He kept struggling to live within his means. He could have used a budget app. Dickens famously wrote about the misery of debt in his 1850 novel “David Copperfield”:

Being in debt makes you think about money too much. You fear it, you hate it, you need it. There’s never enough. Your life becomes all about making money.

“A Christmas Carol” reminds me that focusing only on debt and money does no one any good. Debts keep you desperate and miserable. Greed freezes your heart. A balanced life brings peace, including financial peace.

In the preface to “A Christmas Carol” Dickens wrote:

“I have endeavored in this Ghostly little book to raise the Ghost of an Idea which shall not put my readers out of humor with themselves, with each other, with the season, or with me. May it haunt their house pleasantly and no one wish to lay it.”

May you be pleasantly haunted this holiday season.