Spending More on High Quality vs. Saving on Cheaper

When my future husband and I were dating, we started playing tennis together. I was a rookie, but he loves to play and patiently showed me the ropes. We were playing so much that I got tired of borrowing a racket, so I decided to buy my own. Little did I know this purchase would raise an issue we’ve faced our entire marriage: spending more on high quality vs. saving on cheaper products.

We went to the sporting goods store together. There was a cheaper Wilson tennis racket that was fine, and then there was a fancy racket that was apparently super good and on an awesome sale, but still cost a lot more. I don’t remember the exact prices, but it was a no-brainer for me—I was going to get the cheaper one. We got into a brief philosophical discussion standing there in the aisle: when do you justify spending more on high quality and when do choose to save on something of lesser quality?

I bought the Wilson. Later that day our discussion came up with my husband’s sister-in-law. She didn’t get it. “Why wouldn’t you get the better racket?” She told me she always buys better quality because it holds up better over time. She pointed to an expensive bike she had just bought, even though she and her husband were poor college students. (I didn’t get THAT.)

But I reasoned that I might never get really into tennis, and I hated to invest in something that could potentially gather dust. I’d rather wear out the Wilson first and prove to myself that I’d make a high-quality racket worth it. We just didn’t understand each other.

You should know that 15 years later I still have that Wilson racket. I play about once a year and it needs restringing now and then, but it’s still kicking. BOOM. 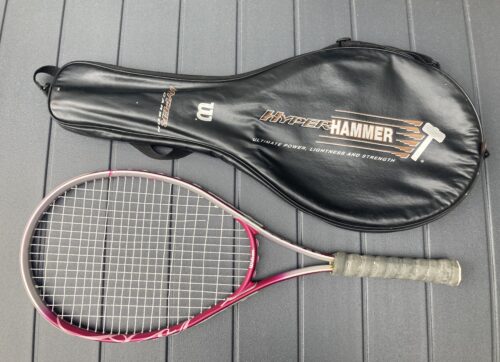 I’m inclined to be a bit of a cheapskate, but I know my husband (and our sister-in-law) are often right. You have to take into account something’s value over time and your ability to resell, as well as the thought of filling up our world with cheap, one-use-only junk.

There are times I’ve learned to pay more. For example, clothes. Even though I was raised wearing clothes from K-mart and Ross, I’ve come to learn that you get what you pay for. A cheap blouse will pop a seam or stretch out quickly, and it probably wasn’t made well or in a humane, eco-friendly way. (I read “Fashionopolis” by Dana Thomas last year and it haunts me every time I shop for clothes.) We’re on a budget, so I’m not shopping on Fifth Avenue. But I do try to get basics that will hold up for as long as possible and hopefully save me money per wear.

But there are other times when I still refuse to pay more. One of those times is food staples. Cheaper food can mean it’s less nutritious or not as flavorful. But just because it’s generic doesn’t mean it doesn’t work just as well. My husband has convinced me that generic peanut butter ain’t the same, but you better believe I buy generic basics like flour, sugar, pasta, and frozen vegetables. I thought this article that discussed just how often chefs buy generic was fascinating.

But what about you? When are you okay spending more on high quality items? When do you think it’s fine to pick the cheaper option?