My Credit Score Has Improved to Excellent

I’ll be updating my net worth at the end of the month, as I did last month. But I have some good news about my credit score to share before then!

My credit score has been updated

…and it’s now Excellent! It’s 814 with Equifax and 736 with TransUnion. I was sort of expecting that, seeing as my credit utilization ratio dropped dramatically when I took out the loan to pay off my credit cards with much lower interest rate. 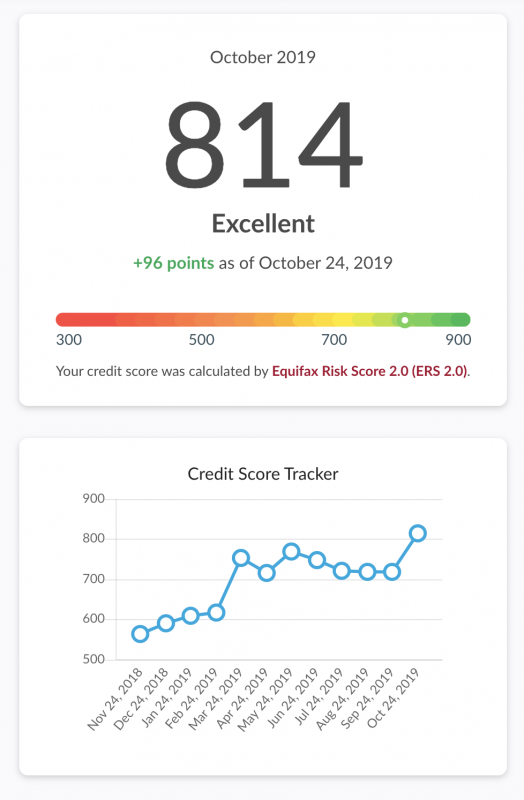 You can see on this chart it was 560 a little over a year ago. I don’t think I’ve mentioned yet that I filed a Consumer Proposal in 2013. A Consumer Proposal is an alternative to bankruptcy, similar to a Chapter 13 Wager Earner Plan in the US. You receive an R9 credit rating across the board and your credit is ruined. This was a HORRIBLE financial choice for me. I only had 9k in total debt and had never missed a single payment for anything! Insolvency Trustees can be kind of predatory, let me tell you. I’ve met with many financial advisors who were dismayed to learn I was advised to take that route with so little debt. They didn’t even renegotiate the debts for me, which usually happens. The balances were so low they didn’t bother.

How does the Consumer Proposal work?

You have five years to make payments, and during that time, you have no credit. All your ratings are R9, the lowest value, for the duration of the proposal. You can pay it off early, as I did, and then you have a two year period during which the proposal is still visible on your credit report. Mine fell off my credit report early this year. It’s a very serious decision to make, as it’s in the public record and leaves a big scar on your financial life.

My landlord ran a credit report on me in 2013 when I moved to the house I’m in now, and he showed it to me. It actually appears as though you’ve gone bankrupt on the report, which made me sick to my stomach. If anyone ever wants to hear about the process and why it was a terrible decision for me, I’d be happy to write about that.

How did I rebuild?

Capital One was a major help to me. They gave me credit when no one else would. Part of the Consumer Proposal process is taking government-mandated finance classes. One of the last steps towards the end is to open a credit card, and put down money to guarantee it, if need be. I didn’t have to do that. Capital One actually gave me a credit card with a $2000 limit when I had a credit score in the 400s. I don’t know how wise that is for Capital One, but it worked out well for me and I was able to rebuild my credit. Unfortunately, a few years went by and the debt was racked up again! That’s the cycle I am working so hard to avoid this time.

I paid all my bills on time (as I always had!) and paid deposits for my utility bills. I had to pay $200 each in advance for my phone plan and my internet/tv accounts. Over time, my credit slowly crept up. I applied for another credit card in early 2019, and that boosted my score. Once the R9s began falling off, my score really climbed. I bought my car in February of this year, and managed to negotiate very low financing. 1.99%, is obviously not as good as 0% but I didn’t qualify with a credit score in the 600s. Buying the car really helped my credit as well.

The weird thing about credit scores…

I am about to make some decisions that are indisputably good for me financially. I am going to close a credit card and my $12/month bank account. I’ve applied for a free checking account with Simplii Financial. There’s no universe in which someone could argue getting rid of a credit card and closing a bank account are a BAD idea…except the credit score universe. Length of credit history matters, so I will probably take a big ding when I do this. But I’ve learned my lesson, and I don’t need an excellent credit rating right now. I’m not applying for anything. I need to make the best decisions for me and set myself up for success. The last thing I want is a credit card balance.

All in all, credit scores are pretty arbitrary and silly – except when you need to apply for a mortgage or loan! Ugh.

Lastly, in my previous post, I mentioned telling you about appliance thrifting. Scratch that! I took apart my microwave and fixed it. Thanks, YouTube! I also realized my oven was wonky because one of the heating element wires had fallen into the insulation. I took the back off and fished it out and reconnected it. Feelin’ handy, thankyouverymuch.