A couple months ago, I had a bit of a er……. “mishap” with my side-view mirror.

Our garage is a bit oddly shaped because it’s wide inside, but the door is much narrower than the width of the garage. It’s a bit like this: 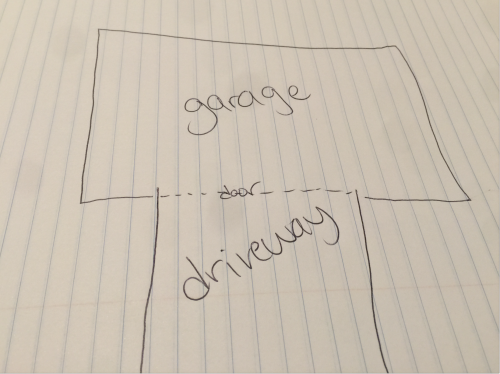 Anyway….from the title of the post you can probably see where this is going….

One day as I was backing up out of the garage, I didn’t quite steer far enough back toward the center. As a result, the side-view-mirrow got “caught” on the lip of the garage door and bent my whole side-view mirror backward. It somehow didn’t break the mirror glass itself, but the casing for the mirror got pretty badly dinged up. It cracked the plastic and busted the clips that held the mirror in place. It no longer functions as it should (its intended to have electric mirror control, but that no longer works). As a quick fix, I taped the mirror back in place. Otherwise, it just dangled on the end of some wires since the clips it’s supposed to be secured within are broken. It’s pretty……low-budget. Ok, ok. It looks terrible. I’ve been driving around like this for a couple months now. I don’t even know whether it’s legal (I think so since the mirror is there, but it’s not exactly safe since I can’t change the mirror’s position to use it as it’s intended to see vehicles to my side/behind). At any rate, I’ve been putting it off for far too long and I need to do something about it. It looks bad and frankly, isn’t that safe.

When I googled 2011 Ford Explorer Side-View Mirrors, I was kind of shocked at how expensive they are! Looks like it’s going to be about $240 or so just for the part, not including labor. But then I got to thinking……is this something I could somehow DIY??? Like, if I found the part at a salvage yard, is this something hubs and I could figure out together – much like we replaced the leather on the armrest? But the fact that it has electrical cords worries me. I don’t know how to wire all that stuff together. Maybe hubs could figure it out?

I wanted to bring it to the BAD community.

Anyone with car/mechanic experience….how difficult do you think it is to replace a side-view mirror with electrical components? Is this something worth looking into doing ourselves or should I save myself the headache (and possibility of buying the part and somehow damaging it on the install) and just take it to a shop? Thoughts? Advice?