Disparity between Girls and Boys Sports

I spent the morning at a fundraising tournament for Princess’ high school volleyball team. The funds raised from this and two other fundraisers they have planned are to help offset the $300 price tag for the parents. Which in and of itself is great!

Is it Really a Fundraiser?

However, my concern with this type of fundraiser is that the bulk of the financial investment still lies with the parents. For instance, each player had to pay $5 to play. They also had to either supply cases of drinks or baked goods to sell at concessions.

From what I can tell, there are 10 teams here at $30 per team, that’s just $300 they’ve brought in. I don’t know how much a bake sale at this type of event is going to make, but I cannot imagine it will be substantial.

While there is no cost for labor. The coaches are the referees and vollyeball players are working as line judges, covering the door (it is $5 to get in for spectators,) and selling baked goods. I just can’t see how this type of event is going to pull in any significant amount of money to help us parents out.

In fact, after the prizes they are giving to the top 2 or 3 teams, well, I just don’t see this being successful as a fundraiser.

Or is it Just Fun?

Granted it was a lot of fun; they are obviously enjoying playing with teams of their own creation. There are teams comprised of football players only, family teams from the parents down to the young siblings and parents playing with their children and friends. 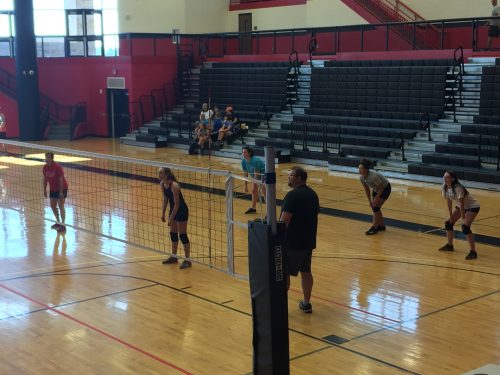 Ready for play – Princess and her teammates ready at the fundraising tournament.

Perhaps if it had been better advertised. I think there was just two messages sent out…one with the volleyball players themselves via a flyer and the second a social media post just a couple of days ago. It’s too bad the support for girls sports is underwhelming compared to the local football team which you cannot get away from.

Disparity between Boys and Girls Sports

Even the girls notice. I had a group of four volleyball players in my car yesterday, and they were lamenting the disparity in funds and support for their team versus the boys sports. Not only did they bring up the cost, but also the lack of new uniforms and new equipment. But worse then that, at least in my eyes, was the lack of recognition for their efforts.

Evidently, during announcements, the sports highlights are read and little to nothing is said about the girls sports unless there is a “star” player who did something amazing. I don’t know. This is really our first time with public school sports.

Princess is loving it, but it saddens me that even the girls recognize the difference in financial and community support.

Is this the same in your community? Has anything been done to address it? I’d love to hear your thoughts.