Starting The Month Off Right

Talk about starting the month off right! March is a 3-paycheck month for me (anyone else?) 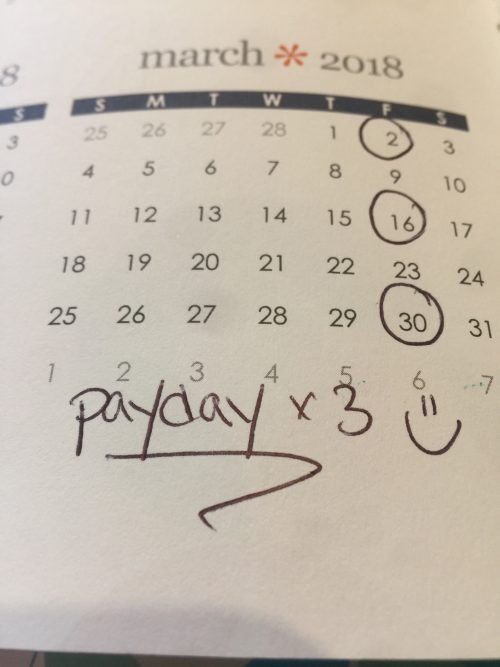 In the past, we’ve been able to put the entire extra paycheck toward debt. But right now we’re still in a situation where we’re totally out of money before the month is over, and scrambling to pay bills that are due at the beginning of the next month. We’re still working on budgeting, in general.

It’s very stressful and not very fun. So I decided that with my third paycheck, instead of making extra debt payments, I’d create a bit of a buffer in our budget by pre-paying some of our bills that are due in early April. It may not be the most fun way to spend extra money, but it makes me feel good to be starting off April on the right foot!

I logged into my bank account’s bill pay center and paid for our phone (due 4/1), Citibank credit card (due 4/4), Wells Fargo credit card (due 4/5), and childcare (due 4/10).  I’ve also set a chunk of money aside because I plan to mail a large check to pay the remaining balance of our 2017 property taxes (payment must be post-marked by 5/1, but I’m planning to make the payment on 4/13).

The third paycheck month is coming just at the right time to help create some breathing room in our budget, especially with our property tax payment coming due. Usually, I get a lot of satisfaction out of making those extra debt payments, but I think this time the money is well spent in creating a bit of a buffer for us. It reminds me of when we used YNAB to live on last month’s income. It took awhile to build up the extra, but it helped alleviate so much stress due to budget and/or income fluctuations. I think this will be a goal we’ll have. Trying to get back to living on last month’s income again.

Mypaperwriter.com – paper writing service.
Stop your struggle and visit Thesishelpers.com to get thesis help.
When there’s no time, Assignmentgeek.com will help with homework.