We went over to a friend’s house to go swimming in their pool this past weekend. My girlfriend ran inside for a moment and emerged with the BEST lemonade ever! I asked her if it was store-bought or homemade because it was so dang good!

Imagine my surprise when she said it’s made with bottled lemon juice!!! But not just any old lemon juice – Costco does it again with some of the best organic lemon juice I’ve ever tasted! And because I’m lucky to have great friends (and I think it comes in two-packs at Costco), my friend gave me an entire bottle of lemon juice to take home for ourselves! I’ve been a lemonade-making machine since then! I even did one batch of raspberry lemonade (by muddling and then straining the raspberry seeds out). FREAKING DELISH!

I’ve used this simple recipe for homemade lemonade (though I use a little less sugar than recommended). The real star of the show, though, is Costco’s bottled lemon juice! 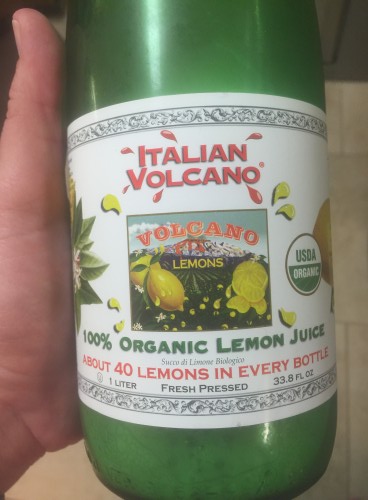 I have to admit that I don’t know the exact cost given that the bottle of lemon juice was a gift, but I’d be willing to bet that on a price-per-pitcher of lemonade, it’s GOT to be cheaper to make homemade than to buy Simply Lemonade (which would typically be my go-to).

You guys have got to check this stuff out! Delicious!

What’s your favorite Costco find? How do you save money on beverages? I’m a big “beverage” person – I like tea, lemonade, fizzy waters, an occasional Diet Dr. Pepper, etc. But typically beverages are so pricey! Do you make your own or find ways to cut costs? I’ll also say as a side note that I’ve made homemade ginger ale using this recipe, and it’s also incredible!!!