Sorry for the radio silence this week! I felt like I needed a couple personal days before returning. I promise this will be my last Rocky post. Next week I’ll be back with more of the regular financial/work/life posts. So indulge me in just this last one.

The short story is that we said farewell to our sweet furry friend on Wednesday.

It still kind of blows my mind how quickly things went downhill.

Last Monday we were at the vet for a routine check-up. We literally had NO CLUE anything was wrong with our fur-baby. He had recently stopped jumping up on our bed, but I thought it was due to arthritis. He’s a large dog and 11 years old, so it didn’t alarm me that he was showing potential signs of joint problems. Plus, they were real recent. I thought it was no big deal.

Then last Wednesday we got official word that it WAS, in fact, a big deal. Rocky wouldn’t be around for much longer.

By Thursday morning it was like a flip had been switched and Rocky was SICK. I mean, he was really ill. We were told he might make it 3-6 weeks, but literally the day after the diagnosis he immediately stopped eating and drinking, stopped moving around much at all, and started vomiting multiple times per day. I don’t know the dog’s mind, but I think it’s reasonable to believe that he realized something was wrong with him and he gave himself permission to give into the disease that was ravaging his body (he’d been to the dog doctor twice within a single week, and we left with me sobbing my eyes out. Doesn’t take genius-level reasoning skills to know something is not good). I hired a photographer to come take some final family photos, but the soonest she could get out wasn’t until Tuesday and I was worried Rocky wouldn’t make it that long. So after a serious day of illness all day last Thursday, on Friday I started talking to Rocky and telling him what was going on. I told him that he needed to hold on for a few more days. And again, overnight, he seemed better. Well…better-ish.

He started moving around more, resumed eating and drinking, and stopped vomiting. To be fair though, he never did eat dog food again. Our vet literally said “feed him cheeseburgers” (just basically to say he could have whatever/we didn’t need to put him on a special diet). So during his last week he enjoyed pizza, quesadillas, peanut butter sandwiches, and Sonoran hot dogs. All of his favorite foods!

We had our photos done on Tuesday afternoon. I’ve only seen some initial images, but I do think there were some good ones. I’m still kind of sad because you can definitely SEE that Rocky wasn’t feeling well. I don’t think the photos accurately reflect his spunky personality because, at the point of the photos, he was just barely hanging on (in my own mind, he only made it this long because he loves me and I was asking him to hold on). Even so, there were some good ones that I’ll cherish forever. As a surprise, the photographer only charged us $100. It was a very short session (about 20 minutes) because Rocky really wasn’t feeling up to it and the girls kept having melt-downs (not about Rocky, but just the general run-of-the-mill toddler tantrums).

Wednesday morning, the girls went to their last day of preschool and Rocky went back to the vet one final time. Only this time, hubs and I came home empty-handed. I know it was the right time. Almost immediately after our photos on Tuesday night, Rocky showed signs of serious illness again. He refused food and water and resumed throwing up.

I’m telling you….I don’t even know that I believe in that stuff. And yet…it feels like there’s something to it. He was holding on just for me/for those pictures. When they were done…so was he.

I’m heartbroken and sad, of course. But I also feel at peace, knowing it was his time to go. I also like knowing that he had a full lifetime of many wonderful memories and lots and lots of love, hugs, and attention.

I want to thank you all so much for your comments, kindness, and virtual hugs. I really did feel each one! I also loved your tips!

A few of you suggested doing a doggy paw print mold. And thanks to the magic of Amazon Prime, I was able to get this package mailed same day this past weekend. I had Rocky do the mold imprint the same day. I haven’t actually matted it yet, so the picture below is just kind of sitting there (not properly matted and framed), but this gives you an idea of how it will look. This picture is one from 5 years ago at our baby shower for the girls!! I may end up replacing it with one of the professional photos but I love this shot because his eyes are so bright and he looks so happy (he was in the middle of playing ball, his favorite past-time). On the side with the paw print mold, I also plan to mount his name-tag (a bone-shaped tag saying “Rocky” with our phone number).  I LOVE it and I never would have thought of this idea on my own. It was only $20 and I think it was $20 well spent, in my opinion. Thank you to those of you who suggested this idea! 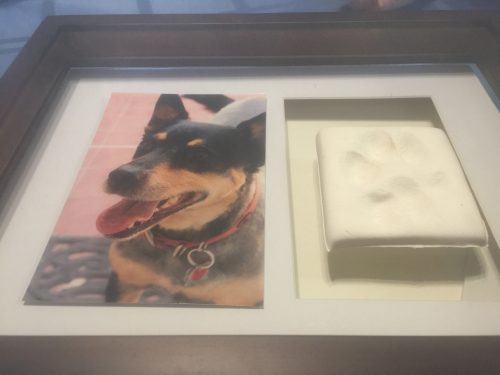 Again, thank you for your kindness. If you aren’t a pet person I know how crazy this all seems. Before we had Rocky, I always thought people who referred to their pets as “babies” were a little weird. No offense! But when we got Rocky I totally became one of “those” people! Hands down! He’s been a huge part of my life the last 11 years! I got him when I was only 21 years old so he has been around for a significant chunk of my life! I know I will miss him always, but my heart will heal.

I hope you all have a great rest of the week and weekend. Thank you for indulging me in these Rocky-heavy posts the past week. Writing has always been healing for me, so I feel like I really needed to write about it as a way to help process the emotions (plus, there have been some serious financial implications, too!) I’ll see you all on Monday with a more “typical” post. Have a great weekend!