So far this month there really isn’t much to say on the Side Hustle front. But I did want to go into detail over a few details.

$257.26 First Check from Contract.  This was for eight hours of work and Mileage.  There were a few hiccups with this project, the first being that I agreed to a bigger area of coverage.  I didn’t account for some of the locations to be over a hour to get to (Which I do not get paid for.)  So that eats away at the profit.

I could look it as in the eyes of an employee, who doesn’t get paid to commute to and from work. But I always look at the amount per hour that I make, so I can average it out, so I won’t look at it from that prospective.

Second thing, I am not getting paid between locations.  No matter what company I have contracted with they have always paid between locations during the same day.  I have worked with this company numerous times and this is the first that this has happened.  I had to reach out to my point of contact and she is asking around, for this shouldn’t be.

Another thing to note that this company doesn’t pay the maximum amount per mile to a location, I will be able to deduct the difference on my taxes.

$117 Tips From Clients.  This amount is a little higher than normal and I am not sure the reason.  I am believing it to be that this month is the half way mark of the year, so people are tipping me accordingly.

Usually I only count the cash tips I receive from Clients, simply because if they used their credit/debit cards to pay that amount doesn’t come directly to me that day, I get it in my monthly check the following month.  These card tips usually evens out my supplies expense.

$137.30 Amazon Profits.  This was a great month so far with the cereal I placed in Amazon.  I made a post in the middle of last month, that I did a Reevaluation and decided to keep Amazon in the arsenal.  Turns out it was a good decision and bad. 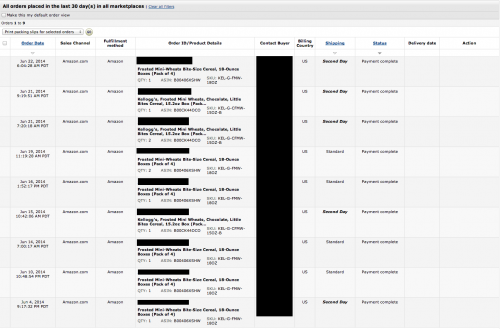 Unfortunately being so new to this, I made a few mistakes this month.  The biggest is that I bought around 500 cans of Chef Boyardee to send into Amazon on the cheap. Everything was looking great, it had a great sales rank (meaning it was selling well), I would be getting about 150% ROI on the product.  After all fees were taken out, I would make about $16 for a pack of 24.

What I did not take into account was the weight of these cans.  Since you can only send 50 pounds per box into Amazon, I would go through a lot of supplies to ship them, plus the shipping fee would eat away a good amount of profit.  So I decided to sit on these products.  I will be probably going to some Farmer’s Markets to sell some of my coupon overstock.  Plus I might bring some used stuff.  Seems like a good way to spend a few days.  I will probably make about 80% ROI selling them through this venue, which is still good, but I definitely would have made more through Amazon.

Another thing is that I decided to forgo the Pro Seller account, which costs $40 per month.  From what I read is that once you start selling 40 items a month is when you should go Pro.  The biggest benefit being that they don’t charge the $1 per order fulfillment fee.  So basically if you sell 40 items or more a month, this is a no brainer.

For the month prior I had the free trial of the Pro Selling Plan.  Well now that I am on the Individual Selling Plan, Amazon reserves money from orders confirmed as shipped during the 14 days immediately preceding each settlement date (the day they pay the merchants.)  So now I have to wait for all my money to be disbursed throughout the month.

Well there is still six days left in the month, wish me luck!