Hey! I realized I have one more quick update to share with you guys!

Remember this situation? To jog your memory – someone from Capital One called and said there was an attempted fraudulent charge on my account, asked me to verify some info, then said they’d send a new card. I asked if this was a tactic designed to try to get customers to use their credit card (since mine has been laying dormant for months).

You guys (many, many readers) scared the crap out of me when you said I’d been scammed! I called Capital One and they couldn’t verify whether the attempted fraud call had come from them or not. They said they’d change the account number and send me a new card (with new account number). They said someone from the fraud department would follow up with me.

Well, no one from fraud ever called.

But about a week after that incident, I got 2 letters from Capital One. The first had a new credit card (same number as the old card). The second had another new card (with new account number). Sooooo, I think that solves the mystery. The call alerting me about the attempted fraud was definitely from them (since they did, in fact, send me a new card). I think the fraud department still should have contacted me, but since I’d explained my concerns to the call center employee, I’m sure there were notes in the system and the fraud person would have easily been able to see that there was no actual fraud that took place (only a misunderstanding when I thought I might have been getting phished, but actually got a phone call from them).

This brings me back around to my original point though….. I still think this might have been a tactic to try to get me to use my card by bringing it to my attention and sending me out a new card so its right at my fingertips (instead of locked away in my safe). It didn’t work. I’ve actually never even called to activate the new card (though I guess I should? Is there any disadvantage not to? I don’t want to actually close the account since it would impact the length of my credit history).

That’s all – one last update for today. Now I think we’re all caught up for the most part. I do have a bit of a secret to divulge (which directly impacts our finances), but that’s going to have to wait for probably another week. Like that little teaser? I’m keeping you on the seat of your pants! haha! Really though, after this whole incident (when I lost a bit of my anonymity), I feel the need to be more cautious about what I say and when. I’ll spill the beans eventually, but I need a little more time. NO – I AM NOT PREGNANT! hahahaha!!!

Have a good weekend guys!!!

I broke my cardinal rule. I counted my proverbial chickens before the eggs have hatched. And I’m taking a bit of a risk to do this, but…..

I JUST PAID OFF MY WELLS FARGO CREDIT CARD!!!!!! 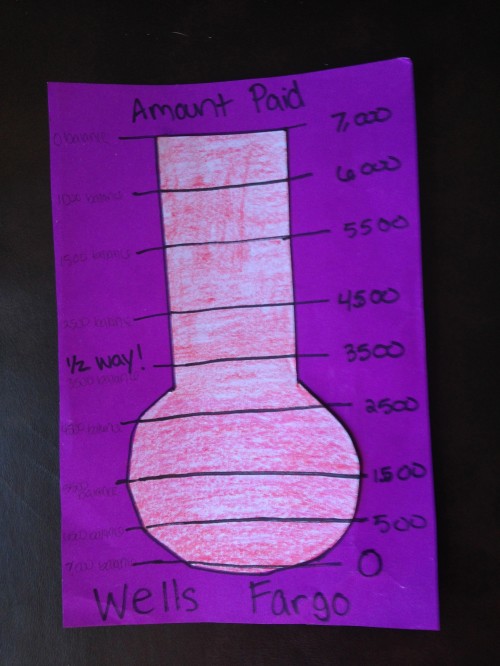 Starting to write here has changed my life (I know this sounds cliche and silly given that it’s been 2 months, but I’m for real). I swear, if I had continued just as a reader (not contributing), there is NO WAY I would be here right now. These past couple months we’ve done pretty well with pay. So we’d be sporting flashy new clothes, or perhaps taking a fun summer vacation. We would put a little extra toward debt, too, but we certainly wouldn’t be throwing every single penny possible toward debt payments and, thus, be in our current position.

How did I do this?

First, we’ve been cutting back (I have a whole money-saving tricks series!).

But let’s not kid ourselves, this has primarily been due to increased income (well above our “average”). And every extra cent has been thrown toward debt.

How else did I do this?

Well…..I cheated the system a little. I couldn’t help it. For those with variable incomes, this is a “do what I say, not what I do” moment…..

I have mentioned before that we have a budget (for all of our minimum expenses and debt obligations). We wait until the month is completely over to determine how much “extra” is leftover, and we apply that money toward debt in the following month (as a one-time snowflake payment).

Wellllllll…….I didn’t do that this month. It was driving me CRAZY to see my checking account balance high enough to pay off the WF CC and I didn’t want to wait until May was over to apply the funds! So, this messes up my budget a little but I ended up doing two things I would generally advise AGAINST for anyone with variable incomes (1) I spent money that will hopefully be in surplus from this month (May) to apply toward the WF balance (even though we don’t know yet exactly how much surplus we will have), and (2) I used some logic to assume that, should our surplus not be as much as I’m guesstimating….then I can “borrow” the money from myself. Our current monthly payment to WF is $900, so basically I’m using the June money and applying it toward our balance NOW instead of waiting a week until June is officially here.

I was able to do this because we currently have these funds in my checking account. If something were to go wrong (i.e., husband has work problems/doesn’t have jobs the rest of the month/terrible problem that costs money instead of making money), then it is still “okay” because I had this money available in my Capital One 360 Savings (I talked about all my assets in this first post…we don’t have a ton, but we do have some liquid cash in a money market account + CapOne 360 savings).

This is definitely “counting my chickens before the eggs have hatched” because the month isn’t over yet….so I have no way of knowing whether our income will truly be high enough to justify a huge (almost $3500) payment toward this bill.

But I did it anyway.

So hopefully when the dust settles from May I’ll discover that I made a good decision (meaning, we had enough “extra” money to cover this expense). If not, then that just means that our savings has decreased a little and – oh well. I think it was worth it to get out from under the 13.65% APR credit card debt (side note:  Now all of our remaining debts are under a 10% APR. For some reason, this feels like a big threshold to cross – even though I won’t be satisfied until we have NO debts and aren’t paying ANY interest!)

Thanks for all of your advice, suggestions, and support along the way!!!