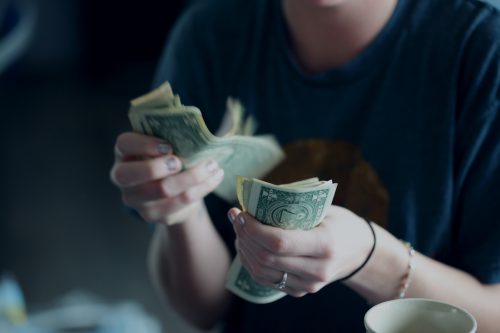 A budget. Often when I hear people doing their debt-free scream on “The Dave Ramsey Show,” they say the secret to getting out of debt is creating and following a budget. No fancy tricks, no gimmicks—just simple budgeting methods.

I’d never been motivated to deal with the details of a budget. I thought I could keep things in my head and try not to spend too much, and we would be okay. But we weren’t paying off our debts, so I finally found a reason to start a basic budget.

Since the summer, we’ve paid off almost $12,000 towards our student loan principal. I credit most of that to getting organized with a budget. I hadn’t really viewed hanging onto debt as an organizational problem, but starting a budget has helped me see our finances are where I can be messy. And now a budget is my tidy, Kondo method.

There hasn’t been one single technique that’s worked for us. Instead, we’ve combined at least three simple budgeting methods to reach our goals:

These helpful outlines of our spending and income are in the front of our budget binder. There are two charts:

– Income Schedule: Lists all the money we have coming in regularly each month and on what dates. I write the amount of the income that comes in bi-weekly and weekly, and then an average for the paychecks that fluctuate. (You could include child support, social security, or alimony here.)

– Bill Schedule: Charts all the regular bills we pay with the payee name, the date due, and the amount charged. I also include details like which ones are on auto-pay.

These charts help me see the nature of our increase and expenses so I know how to structure our budget. With these charts, I can then use a monthly payment checklist each month.

The budget that works best for us is the zero-based budget, a method where your income minus your expenses equals zero. It doesn’t mean we actually have zero dollars in our account as we start each month. It just helps us make a plan for every dollar we gain each month. I make a handwritten one quickly to plan for bills, groceries, and other expenses, and then we know if we can make extra payments towards our debt that month. It also helps me see where we could sacrifice to meet our goals.

We have to make a new budget each month, whether I like it or not. Thanks to my chart, I know which bills will be charged that month (since some are billed quarterly or bi-monthly), and I can factor in birthdays and holidays for that unique month.

3. Tracking with a Budget App

I write down our budget, but then I enter it into an app on my phone and track our spending that way. I love that an app allows my husband and I to collaborate easily on the same budget, and that I can add a purchase immediately on my phone no matter where I am. I’m most comfortable with the free Every Dollar App, but I know some people prefer You Need a Budget or another similar app.

If you find one method isn’t working for you, change it up! Talk to friends and family, or learn online from people with experience like Kumiko Love @thebudgetmom. It took some trial and error for us to finally settle on this combination of methods, but they’ve felt right for us.

Which budgeting methods work best for you? Why?

A week of (mostly) not spending money

As I mentioned last week, I had some financial slip ups towards the end of October. So, I took corrective action in the form of financial purgatory. What did I do?

Lived out of my pantry

I have a veeeeeery well-stocked fridge and pantry for a childless, unmarried millennial. I love cooking and entertaining, and I always have stocks of staples. Dried beans, rice, pasta. Canned veggies, soups, seafood. Frozen meat, veg, seafood. I tend to buy a few of something good when it’s on sale, and most of my grocery shopping (as you know) is pretty frivolous. I’ve certainly cut way back on my bad habit of stopping for fancy impulse groceries on the way home from work, but haven’t entirely eliminated it.

I was in a good place when I realized I had spent all my spending money last week. I’m all set dog and cat food, as well as their supplies. My bills are all paid. I don’t drive much and I have gas in my car. My transit card was loaded. Phew!

I ended up making a huge batch of soup from freezer stuff. There was a turkey carcass in my chest freezer from (Canadian) Thanksgiving and I always save veggie trimmings and scraps for making stock. I made a very hearty chicken soup that I ate for many days, which was probably a good idea with the raging bronchitis.

I had flour and yeast, so I made a double batch of pizza dough. One ball of dough is in my freezer, and with the other one, I made a delicious veggie skillet pizza. 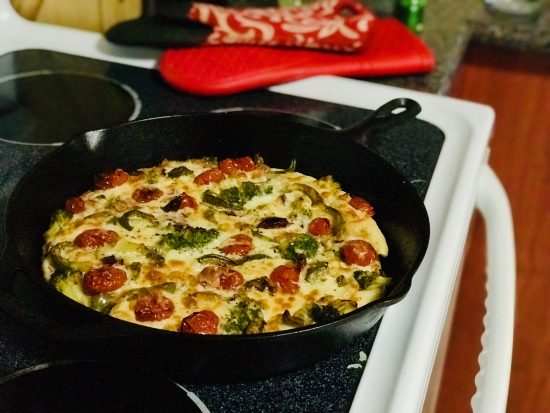 I was proud of this meal.  There was frozen broccoli, some tomatoes and peppers that were getting a bit soft, and cheese I had laying around in the fridge. Win! Skillet pizza is super easy and cheap. I served this with a simple arugula salad (the last of my fresh veg, alas).

That’s pretty much all I ate last week. I don’t mind leftovers one bit.

I helped my grandparents pack up this weekend, and I took three full car loads of things back to my house. The overwhelming majority of the stuff was food! They go to Costco and stock up like it’s Armageddon, and I ended up with flats of barbecue sauce, jam, and juice. I don’t really eat any of that sweet stuff, so I’ll be donating it to the food bank. In addition, I received steaks, a giant beef roast, lots of frozen fruit and veg, and a wide assortment of cheese. They can’t bring perishables on the truck (mind you, it’d be fine – we have ten inches of snow outside…), so I hit the jackpot.

I’m very lucky that my work allows for me to work from home when necessary. I was sick, so I didn’t go to work last week and worked from home instead. That meant I didn’t have to pay parking at the subway ($4 per day) or transit to work ($6.20 per day). I also usually buy a coffee and a bagel once a week, which is only a few bucks, but adds up.

All in all, I spent $11 in seven days. If I continue not spending this week, I’ll be back on track with discretionary spending. And that’s a good thing, because I need to rent a ballgown for an awards evening for work next week. The evening won’t cost me anything more than the gown rental, luckily. I’ll be sure to get a picture to share with you from the event!