The Latest in my Spending Journey – Weekend Spending Diary

Hello! I thought I’d give you a peek into how I spent money on the weekend. This spending diary wasn’t planned, so I definitely wasn’t on my best behaviour. I think being radically honest is going to be a big part of this journey.

First, a note on last week

I didn’t spend any money between Sept 30 and the afternoon of Oct 4. The hand ended up causing me extreme and unbearable pain from the surgery. I worked from home Monday in pain. I went to work on Tuesday and left in tears, and didn’t go back to work the rest of the week. There was a Friendsgiving dinner at my place for 15 people the weekend prior, and I had lots of leftovers. Once I got through those, I made a big pot of turkey soup and lived on that for days on end. Mike bought us Swiss Chalet (a classic Canadian rotisserie chicken chain) with coupons we got in the mail one night to break up the monotony. I spent nada!

I worked from home and left around 2pm for a break. For years now, I’ve used loyalty points cards to reduce my grocery bill. PC Optimum points came in handy to buy acetaminophen and ibuprofen for the hand pain (I alternate taking the two per the advice of my surgeon). The meds and a bottle of Gatorade came to $24 (I got economy-sized pill bottles). I cashed in $20 worth of points and as such, only spent $4 out of pocket.

On to the grocery store.

I bought kale, blue cheese, apple, red onion, and pork tenderloin for $21. With a nice dinner, one might enjoy a glass of wine. A decent bottle was procured for $14.95.

I made a giant massaged kale salad with toasted walnuts, blue cheese, apple, dried cranberry, and red onion that I nibbled on for three days. I served that with half a baked potato and scoop of greek yogurt, and jerk pork tenderloin (weird, but it all worked together). 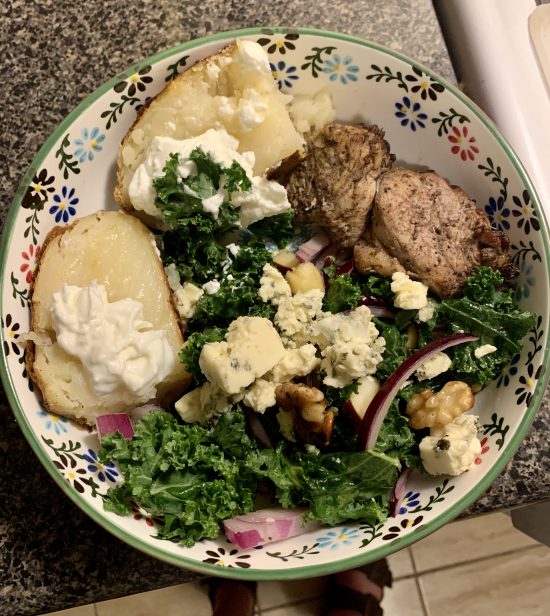 I made eggs to eat with that kale salad for brunch. I’m lucky in that I really don’t mind eating the same foods over and over again. In the early evening, I walked to KFC for a dirty ol’ bucket of chicken, but there was a lineup out the door. Everyone received the same mailer coupons as me! I admitted defeat and walked home to eat leftover jerk pork and salad. I was VERY close to stopping for Hakka food on my way home (my neighborhood’s specialty!) but I didn’t want to blow $20 for no good reason.

That evening, I had plans to go to Nuit Blanche. It’s an all night art festival in Toronto, with large installations of interactive and immersive art all over the city. I hailed an Uber because I was late meeting my friends. Curling my hair with my injured hand took forever (I didn’t think that one through). That cost me $26 after tip. Mike purchased us a bunch of cans of cider, which we loaded in a backpack to wander around the city with. Toronto is kind of like a big street party during Nuit Blanche, and while drinking in the street isn’t legal, cops don’t bother you if you’re being courteous and orderly. Especially during Nuit Blanche.

I ended up getting an Uber for a very dear friend who uses a flip phone – $12.

I ordered Uber Eats Mcdonalds breakfast for Mike and I – $18

Sunday, I slept until the early afternoon. I imagine a good deal of Torontonians did this.

In the afternoon, I went out for weekly groceries. Toilet paper, chicken, shrimp, laundry supplies, and cat food were the larger purchases. My pantry needed a few things stocked up as well. I spent $104, but have what I need for work lunches and dinner til Thursday or Friday. I made cajun shrimp and kale salad for dinner and called it an early night.

Overall, I think this is a fair example of my routine weekend spending. The ride shares are gratuitous over this weekend. Other weekends, my food spending is off the rails. I have work to do here.

We FINALLY have the windows and doors open and the air conditioning OFF! And at this point, based on the weather forecast, I have no plans to turn it back on. I am praying this tolerably warm/cooler weather lasts at least a month.

I look forward to that electric bill!

How about your area of the country? Are you dealing with a hotter than normal October? Or is it starting to cool down for you as well. I LOVE FALL WEATHER! 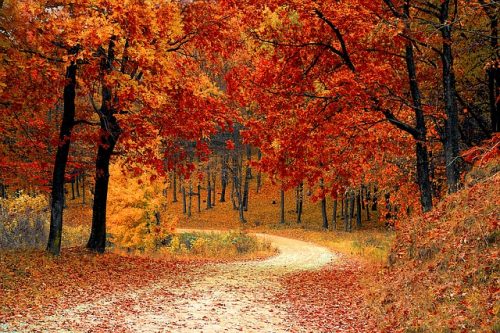 Sweatshirts and shorts, pants and sweatshirts, anything and sweatshirts…this is my kind of weather! And I’m so thankful that I have NO ONE I have to buy fall clothes for! Princess uniform covers the colder weather. (I did break down and add a sweatshirt to the uniform I had already purchased her, but she doesn’t know it yet.)

We are just in a completely different place this year with the private school, the uniform and only one younger child at home. As much as I knew in my head that this year would be different financially, I didn’t realize just how different it would feel. And look to my bottom line!

I definitely have moments that I look back to having all four kids at home, the daily 2 hour commutes to gymnastics training and weekend travels to competitions and miss that adventure filled life. But then I return to this time, the quiet, the steady, slower schedule and am grateful for where we are today.

Volleyball ends this week. And it’s a short school week. So I’m looking forward to some breathing time this coming weekend. Sometime to take a good hard look at my finances and consider my options.