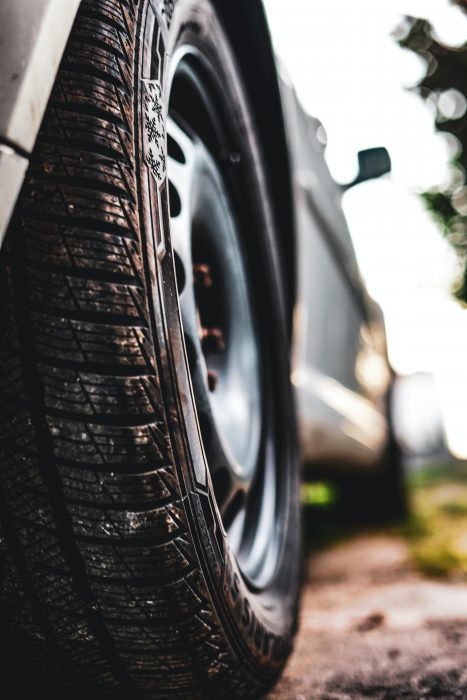 I posted about cars last week, and cars are still on my mind. And that’s because my husband got a flat tire on his Mazda 3 this week. On his birthday. And it led to him throwing out his back. And then it led to us buying new tires. All four.

I was making a birthday dinner for him when he called to say he was on his way home. Just a little later he called again. He was laughing, but a little too hysterically to be normal. I knew something was up immediately. He said, “You’ll never believe what I’m doing right now…”

Flat on the Pavement

He explained—between crazy laughs—that he had started driving and realized he had a flat tire. He pulled over in a parking lot, investigated, and saw he needed to put on the spare. He unloads everything and sees that Mazda has given him the smallest tire iron in the world, and when he tries to loosen the very-tight lug nuts, he hears a pop in his back.

And then he is DOWN. Like laying down flat on the pavement. He can’t move at first. He just lays there for a few minutes flat on his back in this shopping center. Then he finds he can move around a little. That’s when he calls me.

Just then, a lady stops to check on this man laying in the parking lot. I hear him say, “Oh, it’s okay. I’m okay.” Liar.

He tells me he really thinks he can finish the job, but the lug nuts are still really tight. Someone yells from across the parking lot, “STAND ON IT!” Which he does, and it works like a charm.

So he spent that evening eating cake and ice cream while on ice and heat and Tylenol and Ibuprofen. I guess the universe thought it’d be funny to remind him he really is getting older.

The Cost of Four New Tires

He tried to have the tire patched at Les Schwab, but they said it was beyond repair. In fact, the other three tires were wearing so much that we decided it was time to replace all four.

I couldn’t believe it! His car is a 2016 that we bought used three years ago. He mostly drives it 20 minutes to and from work. I guess I wasn’t prepared for them to bald so quickly.

The quote for buying new tires at Les Schawb was $422. He got quotes from Costco and a dealership, and they were both significantly higher. So we had all four replaced and the car is back to normal. (His back, on the other hand… we’re still working on that.)

We paid for the new tires out of our emergency fund, which is what we do with most major car repairs. We really don’t have a category saved up in our budget for car maintenance and repair beyond gas and oil changes.

How do you handle care maintenance with your budgets?

While we were in Texas, two of my five children were called and told they had been exposed to COVID. Now that was my worst nightmare, especially since we were already taking a calculated risk to visit my parents. While my of the kids took it in stride, the other had a complete meltdown.

The same goes for my siblings that were around during our visit (3 of my 4 siblings came to my parents while we were there.) My sister took it in stride and continued to see us the remainder of our time there while my brothers both disappeared completely. I’m not judging just explaining the differing reactions.

Thankfully we are now well past the 2 week window and neither of my children has shown any symptoms. (Yes, I know they could still be positive and asymptomatic.) But back in Texas, one of my brothers has tested positive. Thankfully, his case seems to be very mild and he hasn’t been bed-ridden, etc. at all. 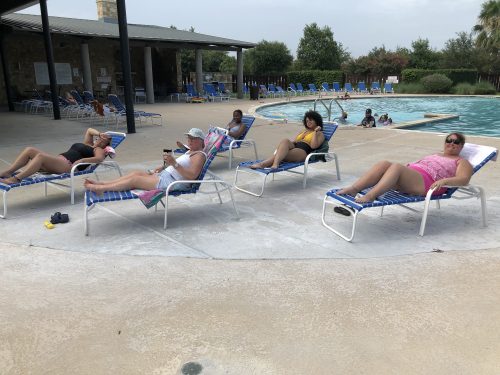 Social distancing and enjoying time together. My sister, mom, me and my two daughters hanging at the neighborhood pool in Texas. We tried very hard to maintain social distance, masked in public places and still have a great time together. My mom has Parkinsons so we do have to help her move around, but we took as many precautions as possible.

While I can’t rule out that we brought the exposure with us, I also know that we might not have. He owns several bars in town and they were open and operational until the week we arrived. And he was definitely to exposed to multiple people with COVID.

Thankfully, neither of my parents is exhibiting any symptoms and while I offered to spend our final days in Texas in a hotel or AirBnB, they refused.

I firmly believe that three of us have already had COVID, back in February. History Buff and I are going to give blood and get tested for anti-bodies this weekend.

As the numbers spike and the worry about schools grows, I continue to prepare for another quarantine period. I am buying a little extra food each week. I am freezing a few gallons of milk. And I plan to make one more Sams Club run in the next couple of weeks to buy a bit more meat. (I’ve gone twice over the last month and meat has been scarce or limited.)