Before and After – Mindset Change

When I would receive an unexpected windfall, I would immediately plan something fun for it. A shopping trip, a weekend getaway or a meal out at a nice restaurant. In my head, I remember those times being kind of the the stages of manic depression…

Really high highs when I was flush with cash, even though there were bills unpaid, debt hanging over my head, etc. I would neglect things that should have been paid for things I wanted to do.

This time of high or joy would be followed by really low lows when I would question everything especially my parenting skills.

There have been several commenters who point out my “poor” person mentality. The example the first one gave was that I bought several magnets as souvenirs when we went to Chicago in February. I found that laughable. My $10-15 of souvenirs is what indicates a “poor” person mindset. I think it is more representative of a frugal sentimentalist. I know LOTS of people who have far more expensive mementos they pick up on every trip they take. (And they are far from poor.) When we began traveling way back when, I think Princess was a month or two old when I took her on her first trip, I chose a memento that was not expensive, easy to travel with and would last forever. 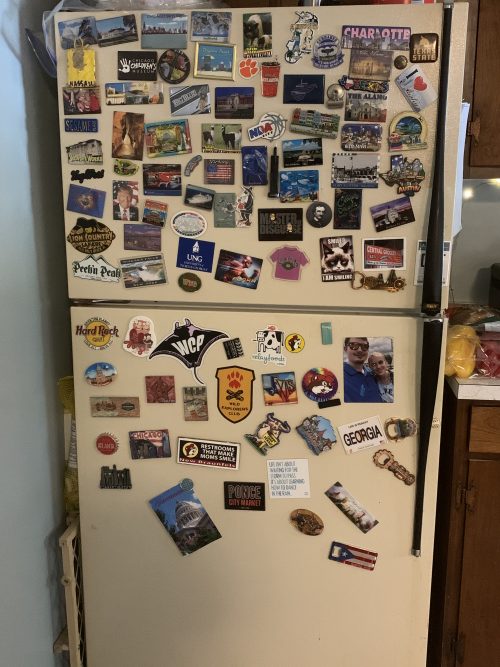 Our adventure magnet collection…not a day goes by that I am reminded of a past adventure when I go to grab something out. Wonderful memories!

I don’t see how wanting something to hang on to and remember our adventures is indicative of “poor” person mentality. Nor do I see how encouraging and supporting my daughter as she become more independent is a “poor” person process. But who knows…

Back to the now…

In the last few weeks, work has pick up significantly, and not just steady daily work but larger website projects as businesses ramp up their online presence. I am getting a lot more project work than normal and that is what I refer to these days as an unexpected windfall. Instead of earning steady money every week, which I am doing as well, these projects come with hefty deposits and final payments. And I can turn most of them pretty quickly when I have time to just sit down and work…

But with these monies, instead of jumping to spend it, blowing it on some whim. I am learning to let it sit.

Part of that is the result of having been in storm mode for the last couple of months. But it is also helping me change my mindset and my gut/emotional reaction to having money that is not earmarked for something. And that has been huge…and sometime hard. But a big change for me.

The good news is that in just a week or so out from my decision to focus on the smaller of my two student loans, I have no paid 2 months of payments directly to that loan. Seeing such quick progress is very motivating.