Which states have the highest debt rates?

It can be difficult to compare who has the highest debt state to state, province to province. Why? Well, the cost of living is a huge aspect. Cost of living can make or break your financial portfolio. Some of you may remember me mentioning I don’t want to be living in Toronto in five years. One bedroom apartments average over $2200 here. My dad bought a huge lakefront house two hours outside of Toronto for the cost of a bachelor condo in Toronto (about $450k CAD). This is an example of where I think Hope has the right idea – she works remotely and doesn’t live in a crazy expensive area like San Francisco or NYC. I dream about working remotely and getting out of the expensive city!

So where is debt highest across the US?

Debt ranges wildly from region to region. And surprisingly, to me at least, the wealthier states have higher debt to income ratios! 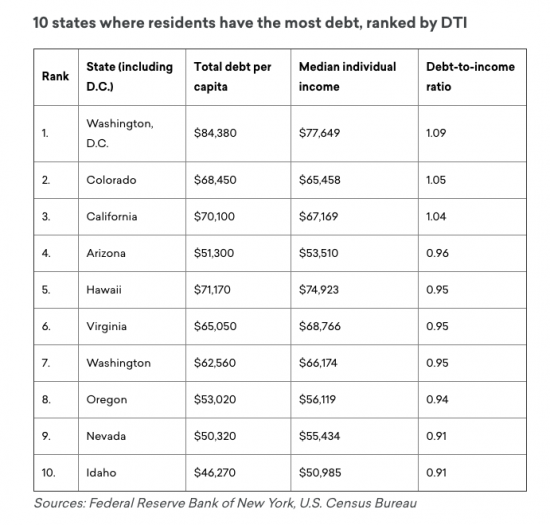 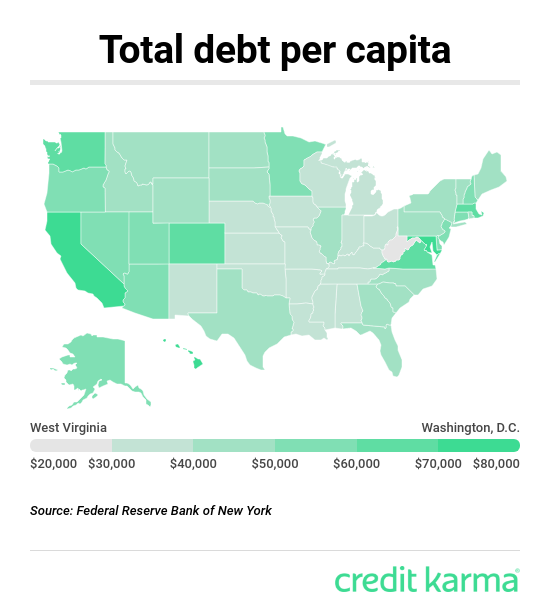 There are a lot of ways to analyze these numbers. According to InCharge Debt Solutions, the southern US is the place with the highest number of bankruptcies, with Tennessee, Georgia, and Alabama leading the US. The highest credit card debt can be found on the east coast, with Virginia, Maryland, Connecticut, and New York all ranking in the top ten for highest card balances. The average Californian carries $10, 175 in credit card debt, but Californians tend to have higher salaries as well. One wonders why they aren’t paying their cards off.

It’s clear there are geographic trends. States with higher salaries and cost of living also carry higher personal debt loads. Are people racking up consumer debt trying to keep up with the Jones? Is it considered justifiable to have an $800/month car payment when you have a big salary to match? And the question stumping me is why does no one seem to save up for anything any longer? The de facto thinking seems to be that cars, vacations, computers for work and school – these are things we finance. Gratification now, payments for the next seven years.

How does Canada stack up?

While doing some research for this post, I learned something alarming about my fellow countrymen and women. Canadians create $1.79 in debt for every dollar we make.

Canada largely avoided the 2008 global recession. We prided ourselves in our strong banks and tight regulations. But our federal interest rate remained so low for so long (0.25% during and after the recession, and even in 2017, it was still 0.5%) and that sparked a huge increase in borrowing. Lending rates are finally going up now, with the benchmark rate at 1.75%. Delinquencies are also on the rise. According to BNN Bloomberg, Canada’s household debt to GDP is 100.2% whereas the US is 76.4% – you win this one, Americans!

Where do we go from here?

In summary, it’s not just how you live, but WHERE you live, that can impact your financial health. Cost of living, earning potential, and spending trends all contribute, but ultimately, you can control your debt burden. Save your money, budget accordingly, and try not to borrow for things you don’t need. Saving money is the best thing I learned to do in 2019, and I hope to carry this habit through my whole life.

And I, for one, will continue to plan my escape from the highest cost of living city.