We are now into the second week of the school year and we are slowly getting adjusted to the new schedule. Getting up early, exercising, volleyball practice, starving children, and long nights of homework. That is our new normal!

(And by starving children, I mean that when I pick Princess up at 6pm from volleyball, she is starving. But I’m in the car for 40 minutes to get her so it’s taking some special planning to time dinners to be ready quickly once we get home. But we are making it work.)

Costs of the New Private School

Not What We Expected

And aside from the financial implications and educational benefits, it is not at all what I (the BAD community expected.) People are SO NICE! So inclusive. Because of the uniforms and inclusiveness, the have and the have nots are not as obvious would expect. 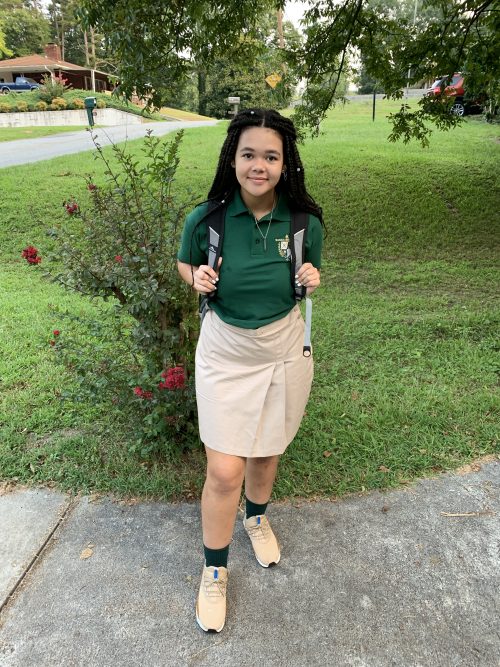 First day of school in her new school uniform.

And because of the boarding and international student presence, the racism and teasing Princess (and Gymnast) had seen as so prevalent at the local public schools is non-existent. There are kids there from EVERYWHERE, all countries, all backgrounds.

This school truly does live up to what I was told was its goal which is to provide a phenomenal education to the Northeast Georgia Mountain kids and more.

Don’t get me wrong, Princess is being challenged to her very core with the 4 honors classes, playing a sport, and a variety of other special requirements…but just wow! I am so impressed and so happy we made this switch. As I predicted, this is going to be life-changing for her and definitely prepare her for the next step in her journey.