When Princess and I arrived at the airport on Saturday to begin our trek to Texas, we were immediately told that our flight was delayed. And we already had a pretty tight layover in Dallas on our way to Austin. But if you travel much, you know that’s kind of par for the course so we just figured we would deal with it when ?we had too.

Then as we were waiting for boarding, they started announcing that our flight was overbooked and asking for volunteers to give up their seats…they needed three. They were offering $125 future travel voucher. We continued to wait for boarding.

As time went on, they kept asking for volunteers and finally they needed two volunteers and were offering $650 travel vouchers…can you guess what Princess and I did?

Yup! After I checked with her, explained it would entail us hanging out here at the Atlanta Airport a bit longer…I walked right up and gave away our seats. We got $1,300 for our two seats. I paid $22 for these tickets (used points.) 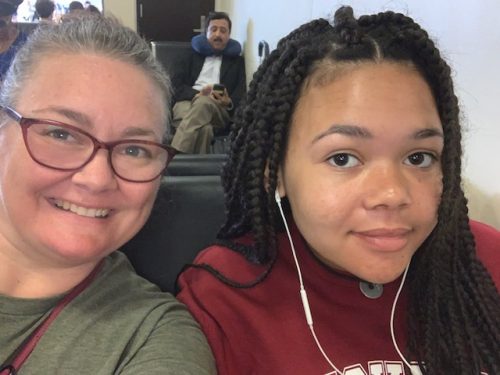 Hanging out at the airport waiting on our flight and holding tight to our two $650 vouchers!

Now I realize that American Airlines tickets are pretty pricey compared to Southwest, which we typically fly. But for $1,300, it was definitely worth a few more hours of sitting there. And I worked the whole time, so it was a win, win!

Instead of getting to Austin at 4pm CST, we got here at 8pm CST…and have $1,300 towards future travel for absolutely free. I can’t see any downside!

Here’s looking to future travel! I love having something like this to look forward too! Have you ever had a similar travel story? Where you walked away with vouchers or upgrades that excited you?