Has everyone heard the news about Zaycon Fresh???

They suddenly closed their doors on Monday, posting the following message on their website: 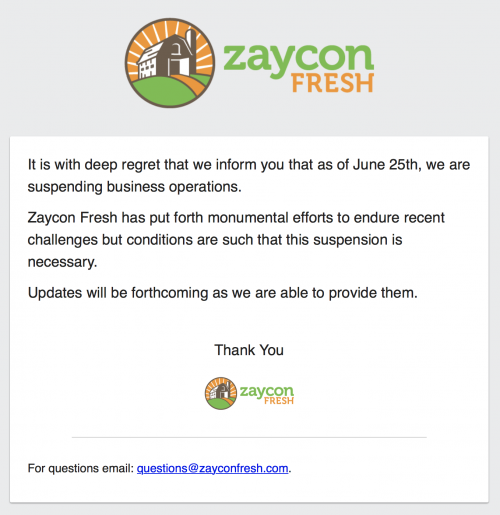 I’ve heard from customers that emails and calls are not being returned, but who knows what will happen in the future.

I was super curious what was going on with this. A previous blogger here at BAD had talked about using Zaycon to save money buying meat in bulk. I’ve looked into it a couple times and have ALMOST pulled the trigger in placing an order. But ultimately, I felt like I could find meat on sale for cheaper than the prices listed on Zaycon’s website and so for that reason I never went through with it.

This was interesting, though, as I have a couple friends who swear by Zaycon and they’ve been noting that their delivery dates have continued to be pushed back again and again in recent months.

In doing some googling, there was very little word about Zaycon’s sudden closure from them. However, I googled “Zaycon lawsuit” and, connecting a few dots, I think I can tell what occurred. I won’t say anything definitive as I don’t know anything for sure. But I can tell from my googling that Zaycon has been involved in litigation with one of their former top executives for awhile. There’s a whole reddit thread dedicated to the drama.

What does it mean for you???

Well, if you didn’t use Zaycon, then nothing! But if you’ve used Zaycon – especially if you still currently have orders placed that have not been fulfilled – you likely won’t be receiving your meat. The best advice seems to be to contact your bank to try to dispute the charges. This is likely the best (and possibly the only) chance at getting any money back from unfulfilled orders.

I hope the readers here didn’t have a lot of money tied up in outstanding Zaycon meat orders!