This is more of a personal update rather than a financial one, so please feel free to skip if not interested.

The kids have now been enrolled in the local public schools for one week. It has been a raging success from the very first day.

Gymnast went in as a 7th grader, after completing the assessment the district provided. He tested much higher for reading but right on grade level for math. They wanted to put him in gifted classes, but I chose to keep him right at grade level while we work through this transition. His statements after the first day:

His favorite class – PE! And he’s decided he does not want to ride the public school bus after hearing horror stories. He’s already had no less than 3 coaches come up to him to recruit him to their sport. It’s going to be interesting to see if he gets tempted away from gymnastics. (He’s already been told he can not quit mid-season, but after April if he wants to, we can discuss other sports for the fall.) 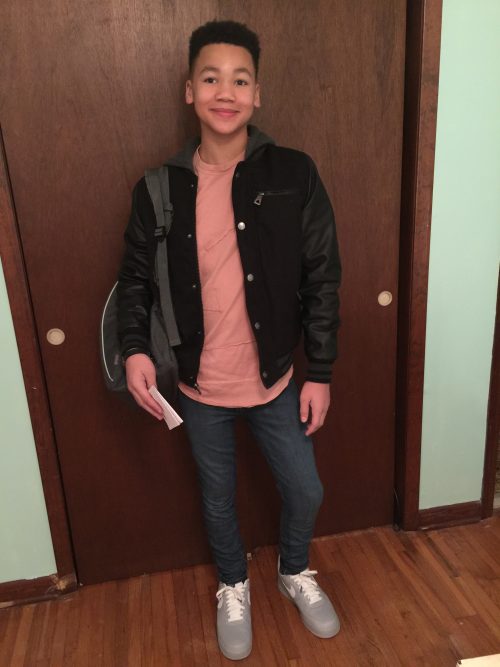 Gymnast is VERY HIGH maintenance when it comes to clothes. As you may recall, they received clothing money a couple of months ago, but at the time they did not know that would be attending public school. Let’s face it, staying home all day and then going to gym requires a bit different wardrobe then going to public school every day. But I was not going to provide any more money. Instead, I took the money their dad sent for Christmas presents for them and let them spend it as they wanted on clothes. They each received $75 and had their own money to add to it.

Gymnast purchased the expensive shoes ($80) and then spent $5 on the t-shirt.  He already had the jeans and he received the jacket from his grandfather for Christmas ($25.) I pay for once a month haircuts for him ($10,) he chose to wait until the end of the month for this one so it would be fresh for school.

Princess went on to the high school, skipping at least one grade. We are not sure if she is going in as a second semester freshman or a sophomore. It will be determined after the public school district evaluates her transcript and class documentation of what she has done thus far. I am really happy with the choice to move her up, she is definitely ready. 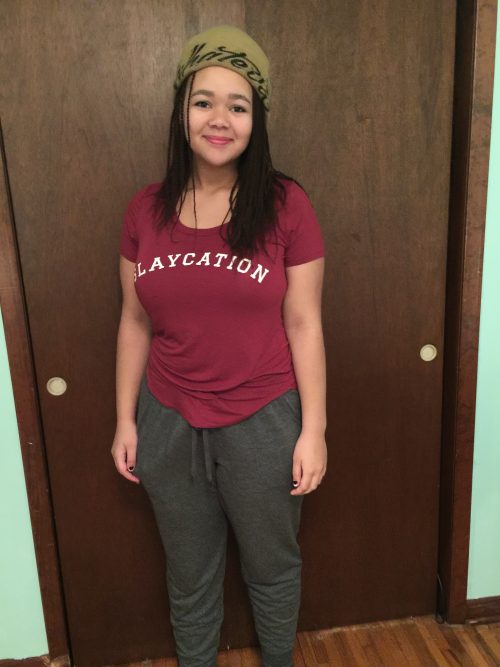 Princess is my frugal, don’t care what I wear child. She chose to shop at the Goodwill Thrift Store with her clothing money. She bought several things and spent about $26 there. Then she went on to Walmart where she got these pants that she loves. I’m pretty sure she still has some money left. I love that she has her own style and is completely comfortable in her own skin. She’s definitely my child, goes for comfort over fashion any time!

Her biggest splurge was her hair. This is crocheted hair. It was our first time every trying it. Everything you can see is fake. Her real hair is braided underneath and the fake hair is crocheted in. The girl who did it charged us $40 and it took just under 2 hours to do. We also had to buy the hair which was just at $40.  We split the cost. I pay for her hair styles 1-3 times a year since it costs significantly more and Gymnast once a month at $10.

The choice to send the kids to public school has caused me more stress than any other decision I have ever made, ever. At times, my fears threaten to overwhelm me. But I continue to try to remain positive. They are definitely loving it.

The logistics aren’t ask challenging as I thought they would be. We are all getting up early enough to eat breakfast together. It’s a good way to start the day. They are both taking their lunches. And then on days we must go to sports training directly from school, I pack a small cooler with snacks for them to have when I pick them up.

Sea Cadet has really stepped up to helping at home, cleaning the kitchen after whirlwind mornings, prepping dinner on late nights and so on.  He started back to his college classes this week. Taking 17 hours this semester and working part time at a local coffee shop.

I can’t say I like this arrangement, but I will say it has not been as bad as it could have been/was in my head. I’ve requested parent teacher conferences with the kids teachers be set up in 2-3 weeks so I can check in our their transitions.  But so far, so good.