So this past Sunday, as I was getting ready to go to the gym, I was searching for a water bottle in our attic (which is finished) I noticed something I’ve never noticed before- water damage. Ugh! Just on the eve of GF’s and my get-away, I had to find this.

What I noticed was bubbling and stained paint on the ceiling and sure enough, when I touched it the drywall was moist (not soaked, thankfully). Check out what it looks like: 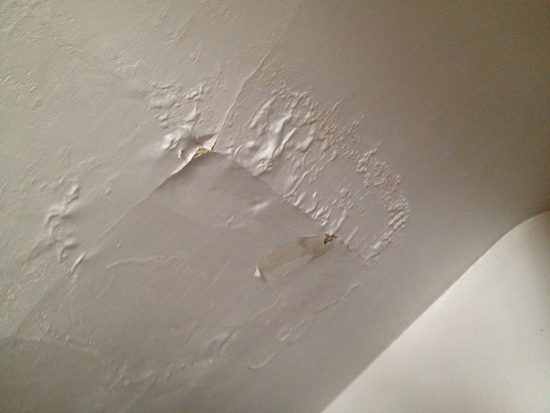 Now, it looks like the previous owners had some issues with this too as it’s fairly evident its been patched in before, but we were told it was fixed. Like I said- I’ve never noticed it before. The attic isn’t a place I venture too often (maybe once or twice a month) but I know I would have noticed it before had it been there. I’m thinking (and hoping) the reason is from ice damming on the roof from over the winter (which was notoriously bad this year). Hustad Companies says “These ice dams not only pose a threat of significant damage to the roof, decking, interior walls, ceilings and floors, but they are also an indication that there is a problem with the roof. The ice on the roofs only just melted 3 or so weeks ago, so this is my feeling. I’ll start removing the drywall and insulation to make sure there isn’t any mold growth in the meantime. I’m hoping if it’s from ice dams, then I should be able to mitigate future issues (by shoveling the roof) until I’m out of debt and have significant savings to have it all fixed (think 2 more winters). If it’s worse, well, I don’t know. I have $1,200 in my slush fund to see if I can have patching done to the roof to buy me some time. If worse comes to worse, I can stop my debt payoff and build my savings. Thankfully, since my expenses are so low, I can bring my savings up fairly rapidly- about $5,000 in 2 months. Here’s hoping for the best!

I also want to share a problem that I have.

For some reason or another, and it doesn’t happen too often: I overreact. Like badly overreact. I can only count on one hand the number of times I’ve gone overboard in my whole life, but for some reason, this roof leak deal sent me over the edge. Let me walk you through what happened and my thought process of the whole ordeal:

OK, so mind you this all takes place within a matter of, at the most, 2 minutes. I spent the next hour pacing the house and cleaning and getting my heart rate up (better than a workout!). GF gets home not long after and I tell her the whole story, including steps 1 thru 9. Her response: you’re overreacting.

Even in the face of confrontation, I was certain I was right: the roof needed replaced, the structure of our house was unstable, and I resented ever buying the place. It took a long discussion, a few examples, and some fresh air to finally bring it home: I overreact, and when it happens, I overreact bad. And now a couple days later, it doesn’t seem so bad. I’ll check it out more in the next couple of days and analyze the situation from there.

When an unexpected expense comes up, how do you react?

Here’s where I stand with my debt payoff:

Hope everybody has a great week!