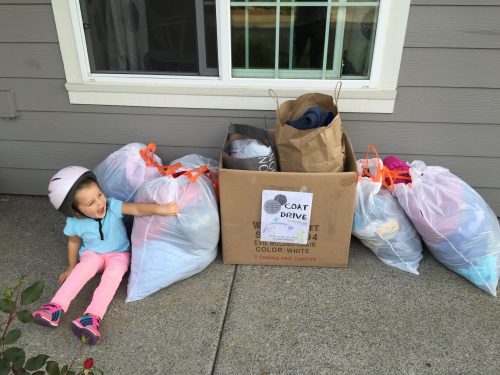 I’m a decade into this parenting gig, and I still feel like I’m winging it. One thing I’m still working on is teaching our three kids generosity. Especially when we’re paying off debt and we can’t give like Oprah, I see we have to find creative ways to teach our kids about being generous.

During the holidays it can be easy to find opportunities to have kids give and serve. But what about the rest of the year? Here are some ideas for teaching kids generosity in the new year:

Whether you give it as a church tithe or to charity, I love the idea of saving 10% of your income for giving. I want them to have better financial wisdom than we have, and I hope generosity is always part of their budget and mindsets. This awesome jar gives your child a visual of where their money is going. (I went with the even more budget-friendly Ziploc containers.)

A few years ago I watched the documentary “Living on One Dollar” with my girls. I realized my kids had never really seen serious, widespread poverty before, and it led to an interesting discussion about what people have in different parts of the world. We also talked about how we could help people right in our own town.

Create Opportunities to Give

I want our kids to know generosity isn’t just giving money. It can be giving time or giving compliments or just sacrificing for another person. Whether it’s helping your neighbors or going out in the greater community, here are 10 ways to show kids how to give:

For 2020, our family is setting a goal to do an act of service together (even small and simple) once a month. I’m hoping it will help each of us to be more generous and less attached to our money and things.

I’d love to hear your ideas.

There were many comments on the amount of money I am paying for the kids’ summer camp this year. And I have always admitted it was a large amount, but I thought it was worth it AND I believe (and still believe) this will be our last year of summer camp.

But even before my job loss, my perspective was changing a bit.  One because of the cost and two as I considered other ways the money could be spent.

In early January, I had a conversation with Princess who was scheduled for 4 of the weeks of camp I was paying for. We discussed my thoughts about the amount of money is a 13 year old friendly way. I also showed her some other ways the money could be spent. I reiterated my commitment of sending her to camp for the four weeks, but I wanted her to consider these other options. And left the decision in her hands. We also discussed the private school she visited last fall. The deadline for application was Feb. 1 and I wanted to know if she still wanted to apply. 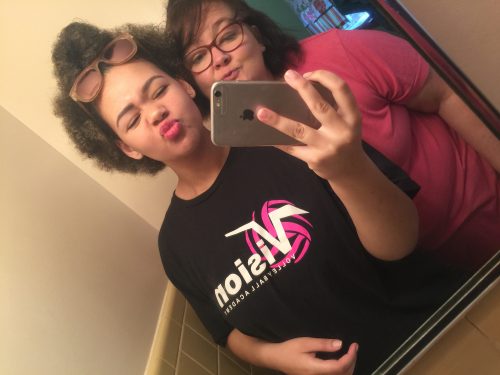 Bathroom selfie time with Princess and I

Every couple of weeks, I would check in with her on her thoughts. No pressure.

A couple of weeks ago, she came to me and said she was willing to give up the second session of camp. I was so proud of her for coming to the decision on her own. (Unfortunately, I probably would have forced it with the job situation. I’m glad I didn’t have too.)

I called the camp this week, and cancelled the second session.  They were very kind about it and said if something changes, they would be happy to offer me the deal I had locked in by booking last summer.

The balance due for my younger two to attend is $1,430 (combined.) While I slowed down on my debt payment while I job seek, I am committed to paying this balance off by the end of April.