It’s funny, even after 3 years of blogging here, you guys always keep me on my toes! When publishing posts that I think might be controversial (like this one or this one), I’m met with nothing but understanding and support. And then I write a post that I think is more innocuous (like this one) and I’m met with backlash on a level I haven’t seen or experienced since early on in my blogging days. Before my financial successes, I was initially met with quite a bit of criticism (some constructive, some….not-so-much).

Nevertheless, I’m in academia. If anyone is familiar with the struggle of responding to “Reviewer #2” (an academic meme), then you know you must learn to grow thick skin. 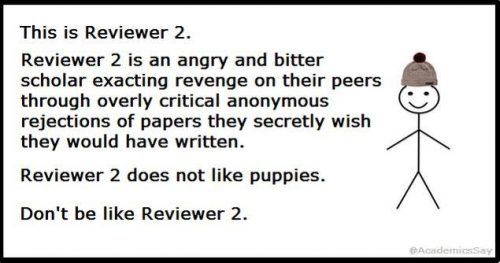 For the record – nothing in the comments was as bad as “Reviewer 2.” In fact, most of the critiques were well-founded and reasonable. I agree with (most of) you! It’s definitely time for a reset. I’ve been working toward that end and am making some good progress on a total budget overhaul. I appreciate the time and efforts many of you took to leave tips and suggestions or recommendations. I’ll look forward to receiving more help and support when I actually post my budget numbers (eeeeeek! I’ll need it!)

For the time being, I just wanted to pop in and say thanks for your feedback! If you haven’t yet, check out the comments on my “controversial” post – I’m making my way through and trying to respond to as many as possible. I’m not always responding to specifics (in terms of numbers) because some of that will be addressed in a forthcoming budget post.

Have a great rest of the week!

March was a whirl-wind of a month! I was gone for a couple days in Texas, the girls had an entire week off school, and it felt like we were being pulled in a million different directions by all of our disparate responsibilities. I’m glad to be back in more of a routine this month and am already looking forward to May. For us in academia, it signifies the end of another academic year and the beginning of a MUCH NEEDED “break” in terms of course-load, etc. (working at a university, I’ll probably always talk about “years” in terms of academic rather than fiscal or calendar years, lol). But May is important for another reason, too. For the past 3 months (including April), I’ve been paying these HUGE payments toward our medical debt. I did so in exchange for a debt forgiveness of about 33% of our medical debt. So come May, we’ll have an extra $1200 that can go towards other debt and we’ll have one fewer debt to report in our debt spreadsheet. It always feels good to knock a debt off, and I can’t wait.

Here’s where we stood as of April 1st, after all of March’s debt payments had posted:

With our recent IRS tax trouble, I’ve been making lower sized debt payments in an effort to try to save up for the upcoming IRS bill. I’m paying minimum payments on all of my subsidized student loans and only an extra $50 above the minimum for my two unsubsidized student loans. As a quick reminder, I’m on the IBR repayment plan so my unpaid interest is forgiven on subsidized loans, but not for unsubsidized (which is why I’m prioritizing them a little). I was concerned when my balances had increased a little this month for the subsidized loans so I called Navient and they explains that the government subsidy (which covers any unpaid interest) is only paid once per quarter. So it looks like the balances have increased a little, but that capitalized interest will be covered at the end of the next quarter. Feels kind of scamy, but nothing I can do about that.

I’ve reduced the amount I’m paying on Balance Transfer #2 down to $400/month. Continuing at that rate, it will be gone by June. At that point, I may try to initiate another balance transfer to move some more debt away from Navient. That being said, I’ve noticed that my recent balance transfer offers have had a bit higher transfer rate than in the past year, so I’d only do so if it’s still a good savings overall. I’ll wait and see when we get to that point. I also wanted to clarify something I’d had wrong before. Originally when I created my debt table I had listed that this bill was due earlier (based off a 12-month timeframe), but I had conflicting notes in YNAB because there I had it listed as being an 18-month timeframe. When we were hit by the IRS taxes, I called for clarification (otherwise, we were on track to pay it off within 12 months, but I wanted to know if we had the extra 6 months wiggle room). Turns out the special offer IS good for 18-months, which is why I’ve been able to decrease my payment amounts. I’ll still have it paid off well before the special 0% APR promo period expires. Sorry for any confusion to anyone who may have noticed!

This is my newest balance transfer. I paid $150 last month, but only have $75 scheduled for this month. Again, I’m paying less so that I can try to scrounge up cash for the IRS.

Everything financial is now tainted by the whole IRS tax issue I’ve talked about previously (see here or here). I’m embarrassed and feel a bit ashamed to be in this position, but I have to say that the tax debt has officially INCREASED our debt and will be setting us back in our progression. At this point, I’m honestly too embarrassed to even give the total amount (though we have finally finished everything with our CPA, so we now have official numbers). I was thinking it would be right around 10k and, if so, I was really trying to scrimp, save, and hustle up any funds and try to pay them in full by the April 18th deadline. When confronted with the true, final amount that we owe, I know there’s no way we’ll have the money together by April 18th. Instead, I’m going to have to set up a payment plan with the IRS and will officially be adding a debt to our list of debts. I’ve been dreading discussing it here because it’s just SO stupid and was 100% our fault. There’s no excuses. We just messed up and now we owe Uncle Sam the big bucks.

Related to everything going on, we’ve really been trying to plan ahead and think about what our family budget will look like in the coming (academic) year. Hubs’ is still currently drawing a (very) small income from his business, but it will likely be gone in the next few months. By mid-summer my big raise will go into effect at my full-time job. Though at the same time, I’ll be losing my side-income from my part-time job. Our kids are starting kindergarten in the fall so our childcare bill will decrease in a couple months (note, in our state kindergarten is only “free” for half-day and we still need full-day childcare so our bill will not be eliminated, but it will be reduced a bit from our current spending). Basically – there are a lot of financial pieces to the puzzle and a lot of things to consider. It’s hard when we don’t have exact numbers, either (e.g., I’m trying to estimate what my net take-home pay will be once my raise goes into effect, but there are many factors involved since a mandatory 7% goes to retirement, and then I also contribute to an HSA and FSA, etc). I think we may have some financial growing pains on the horizon as we figure things out and try to make a path moving forward. I think our path will likely include tightening up our purse strings quite a bit from what we have in the past year. Not that I think we were frivolous in the past year by any means, but I think things are about to really be getting TIGHT. It’s not a bad thing, but it’s definitely disheartening given all our progress in the past year (which, now with the tax thing, feels like a lot less progress has been made since we owe all this money – ugh! So mad at myself!)

Anyway, that’s what’s up in my world.

Oh yeah, and the car situation. That’s still going on. Turns out my car had 2 different problems. One was a Ford issue (covered by Ford) and the other is a warranty issue (covered by my extended warranty). But it’s been a HUGE fiasco because I HAVE to have a car to get to-and-from work and it’s now been over a week with my car in the shop and it still isn’t fixed. But my warranty only covers 7 days max in a rental, so I’ve switched to a Ford rental vehicle and am trying to get Ford to cover the remainder of my days in a rental due to their issue (the Ford issue is actually what rendered my vehicle un-drivable). It’s been a whole mess and is taking up way too many hours in my day. And it will likely end up costing me some money after-all, not only for the warranty deductible, but if I end up having to pay for the rental (if Ford won’t cover it, etc.). Big pain-in-the-butt. But there are worse things in life and, again, I’m thankful no one got hurt and that we had the warranty, etc.

Gotta run for-reals now. I’m drowning in work so bad it’s not even funny. So to bring this post full-circle (as I mentioned in my opening paragraph) – I cannot wait for May!!! Is it the summer yet?? 😉