Well, I’m happy to report that my car issue has now been resolved.

Several people commented on my original post with tips, suggestions, and ideas and I thank you all. Many of you advocated going ahead and starting to look for a new car, given that this seems to have become a pattern (this being our 3rd electronic-related repair in the past year and a half-ish). That being said, I didn’t feel good about that option. I know I don’t want to take on more debt and the thought of trading in my paid-off car to trade down to a “lesser” car wasn’t very appealing. If I’m able, I’d rather stick it out with my vehicle a while longer and try to continue attacking our debts.

So what was the problem, you may ask???

The keys. Something was messed up with the keys. The guy didn’t give me a great explanation (at least one that I could understand) for why the old keys stopped working. But for some reason, they stopped working. As part of the anti-theft system in the car, the vehicle would not turn on because it wasn’t “recognizing” our key as the correct key for the vehicle. So nothing was actually wrong with the car, itself. It was some glitch or error with the key and the anti-theft system prevented the vehicle from starting.

Nearly a thousand dollars later, I have two new keys and I’m back in my car.

Yes, you heard that correct. Nearly a THOUSAND DOLLARS went to this repair.

I’m using round numbers here, but it broke down as follows:

So if you want to see the most expensive key on the planet (as far as I’m concerned), feast your eyes on this sucker: 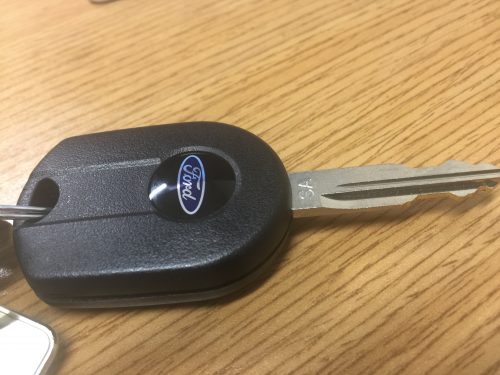 I’ve opened up a little bit about various mental health issues I’ve been struggling with. So instead of seeing the major negatives in this situation (mainly the $$$$$$$), I’m really trying to focus on the positives. When the car key issue occurred, we were at home. We’re so lucky we weren’t stranded somewhere else (think about if it would have occurred while we were on one of our cross-country road trips back to Texas!). I’m also so glad the repair ended up being a quick and easy thing. I was originally being quoted a 3-week wait to get the car back! But after the dealer got the car, they had the keys programmed and I was able to pick up the car the very next day. Also, I’m glad nothing major was wrong with the car, itself. It felt major just due to the inconvenience of having to share one vehicle (plus the giant price-tag seems to have indicated a giant issue), but no. The issue itself was very minor and that makes me feel a little more secure with keeping the vehicle and NOT trading it in.

Right now I’m cautiously optimistic. I do think these car issues have started to multiply. I was really hoping to drive this vehicle for 250,000+ miles. Now I’m not so confident in that plan and whether the vehicle will hold out that long. I think we need to get a better plan in place for vehicle repairs and we need to start thinking longer-term about what our  next vehicle will look like (how much we want to spend, how long it will take to save, timeframe for when we want to buy, etc.). I’ll be honest. I know 2018 just barely began, but I see this as our year of finding balance. I think we’ll continue to make baby steps toward our debt-eradication goals, but I don’t think we’ve got any wiggle room to start saving up for a new vehicle. So for the time being, I’m going to hope and pray our current car holds out and keeps going strong for us. Maybe 2019 will be the year we begin saving up a “car fund” for a new vehicle. I don’t know. All I do know is that this month just got a major blow in terms of finances. Not the way I’d wanted to start my new year. But, again, I’m trying to focus on the positives. Things could have been worse. I’m just glad to have my car back. Along with the nicest set of keys I’ve ever seen in my life (lol).