My car (really a Ford Explorer SUV) isn’t that old. It’s only a 2011. Considering most of my life I’ve driven cars at least a decade+ old, it’s practically new! 😉

The problem is, it’s been driven hard! Every year I’ve taken it on at least two cross-country trips (once in summer, once in winter) during harsh/extreme temperatures (below freezing with snow/ice and over 100 degrees of sweltering heat). Our kids have grown from infants to 6-year-olds and have treated the vehicle exactly how you would expect of young children. Think: lots of crumbs, melted crayons, etc. It’s now nearing 150,000 miles and although the plan has been (and remains!!!) to drive it until the wheels fall off…..it’s definitively taken a beating.

So when it started to do something I thought was a brake-related issue, I took the car to the local brake place. You guys – they had the car for nearly an hour trying to diagnose it! They hooked it up to machines, looked up recall notices, drove it around the backroads and up the highway to check for issues at both low and high speeds. They looked under the hood. They got it up on the lift and looked underneath, took off the tires and checked out the brakes + rotors +  shocks + struts.  I mean, they left no stone unturned. And…..nothing. They can’t figure out what I’ve been feeling.

And so they joked…..perhaps it’s just time for a new car? har har har

Don’t get me wrong – I would love NOTHING more than to have a slightly smaller, more compact SUV. My mother-in-law came to visit a couple weeks ago (she helped watch the girls while I was moving) and she was driving a BEAUTIFUL brand spanking new car. The exact type that I’d like – a small SUV category vehicle. 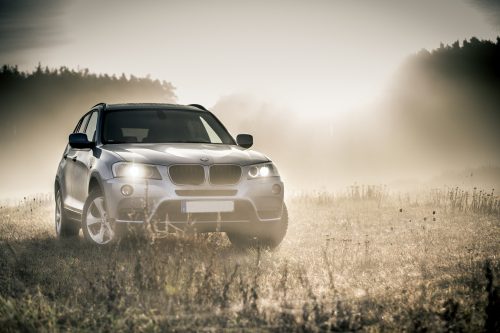 Note, this is NOT MIL’s car – just a picture from the internet. But just look at that beauty! Ha! I’d never buy a BMW SUV due to the extreme cost to buy and for servicing it. But a girl can look! 🙂

In the end, I guess it’s good news. I really thought I was going to be spending $1000+ for brakes or struts or something along those lines. In the end, I walked out only spending $35 for a high mileage oil change. Not too shabby. I’d much prefer the lower cost given that my budget can’t necessarily accommodate a $1,000 vehicle repair right now (though, if there’s one thing you guys have taught me – it’s to take care of my vehicle so it’s safe and reliable).

I am a looooooooooong way off from buying a new-to-me car. I still remember the elation I felt when I finally paid off my car a couple years ago. I am in no place to be taking out MORE debt for another vehicle. I swore up and down that in the future I’d save up the money and pay CASH for any future vehicle purchases. I still intend to keep that promise to myself.

But it did make me chuckle with this mystery car issue that has suddenly disappeared and the suggestion that the “fix” is to get a new car. groan. Maybe for my 40th birthday (I’m 35 now, for comparison). I’ll have to start saving at some point in order to make it a reality!

Do you have family/friends/co-workers/car repair people joke that your car is such a piece of junk that you should just buy a new one??? I guess I should take it as a source of pride that I continue to hang onto my FULLY PAID-FOR car rather than rushing out and giving into consumerism. It also kind-of blows my mind because my car was nearly $30,000 brand new. So the fact that it’s viewed now as this POS is kind of nuts. Like, this was a very expensive top-of-the-line SUV when it first came out. And that was literally only 7 years ago!!!! How warped is the American consumerism world now?!

I apologize for the delay in posting this. I had an unfortunate encounter with a bee or wasp or something stinging yesterday morning that left my eye swollen and runny for the day. Computer time was limited as a result. Thankfully, I am back full force this morning.

These are my actual income and spending numbers for this past week:

It’s been a really busy week. Work is picking up and is steady…yeah! Today I’m taking a few hours off to eat breakfast with my mom (in town from Texas) for her birthday and then drive my sister to Charlotte to spend the rest of the week with her friends (her, not me, I’m just dropping her off.)

Notes on this Past Week’s Spending

I was off on almost every one of my anticipated numbers for this week. But I’m pretty happy with the end result.

As a side note, it looks like History Buff will be moving in with us this coming weekend. He is praying his car makes it down from Virginia. The plan is that he gets a full time job and in January will return to school as a dual enrolled high school student to complete his senior year. Then he will continue with his education…not sure in what yet. He is considering both trade school and four year school. (Before he dropped out and moved out just after his 18th birthday, he had planned to attend ODU and pursue a degree in History with hopes of becoming a teacher.)

It’s going to make our living situation a bit tight as Sea Cadet is already living in the living room, but we will make it work. And I am VERY HAPPY that my son is coming home. I know he has learned some hard lessons these last couple of years. But some of us (myself especially) sometimes have to learn lessons the hard way. Ya’ll know that about me, don’t you?