Wouldn’t it be great to live debt-free and not have to worry about making monthly payments to several credit cards? While it may seem impossible when you’re buried underneath debt, you can use the snowball method to start making headway on that debt. The debt snowball method works by starting with the smallest debt and getting it paid off before rolling the payment into larger debts. The snowball method doesn’t seek to save you the most money since you’re not starting with the higher interest rate, but rather the lowest amount of money owed. This method helps you stay motivated and feeling like you’re making progress toward paying off your debt. Here’s how to get started with the snowball method.

Every single bill you have should be listed on this. If you just got a $50 doctor’s bill in the mail with a $10 minimum payment, list it. Once you have all the debts listed, you have a better idea of how much you owe with a clear breakdown of each payment.

Start by paying off as much as you can on the smallest debt. Once your smallest debt is gone, take the payment from it and start applying it to the next smallest debt while making minimum payments on your other debts. The reason this method is called the snowball method is that your money starts to get freed-up and grows like a snowball rolling down a hill. Focusing on paying those smaller debts frees up money to continue paying off the more substantial debts. This method of debt repayment is excellent for people who can easily lack motivation if they’re not feeling a progressive decrease in the amount of debt.

Roll Smaller Payments into Bigger Ones

Once your small debts are paid off, you can begin rolling those payments into your more significant obligations. For example, that $125 credit card payment you were making can be combined with the $25 minimum on it for $150 for the next payment. Once your second debt with a minimum of $75 is paid off, add that to the balance for a total of $225 toward the next debt. You can see how this method quickly compounds to help a user get out of debt. If you manage to acquire a new debt that is less than the one you’re currently focused on paying off, make sure you pay it off before starting in on your larger debt. Always be able to adjust your repayment strategy to accommodate for new, smaller debts that might appear.

Following the snowball method is a sure-fire way to achieve your debt-free lifestyle. Sometimes your everyday spending can come to an abrupt crash if you find yourself in debt, so much in fact, that it is the same as fighting over who’s at fault in a car accident, so it’s time to take responsibility to get debt-free if you follow this simple principle. Some snowball method calculators are available online to help you decide how much you should pay on each bill as you work to pay off the smallest amount first.

I think I’ve just experienced my greatest “Single Woman” win thus far! (Side note: I capitalize “Single Woman” as a half-joke. One of my good grad school buddies just went through a tough divorce and bought her first house as a single woman. She sent a picture of a portion of the house contract. The contract listed her as a “Single Woman” in caps, and she was a bit offended by it. So I’m seizing the term “Single Woman” – with caps – as my own and making it into a good thing instead of a perceived negative).

I fixed my driver’s side-view mirror that has been broken for literally 6+ months! I first wrote about it back in the summer and it had already been broken for a couple months at that point. I’d intended to get it fixed over the summer, but then our A/C went out and cost $$$, then hubs and I decided to separate, then I moved out (which cost $$$), and I mean it’s just been one thing after the next this whole time.

After fixing my electrical dash/MyTouch system, by myself (something I never thought I’d do), I decided to conquer the side-view mirror. I bought the part on E-Bay and the exact day it came in I determined, “I’m going to put this mirror on today.” Period. That was it. My resolve was strong (I can also perhaps be a bit stubborn sometimes???)

THANK YOU to the commenter who told me to check out this YouTube video for guidance. It could not have been more perfect!

It showed me how to remove the mirror coverings, how to use a plastic ziplock bag to save the bolts from falling into the door (genius trick!), and what to do.

In full disclosure……It did take me nearly a full 3 hours. I got most of it done in about 15 minutes. It was that easy!

But there’s one bolt that’s down low/covered by another plastic piece. I had a REALLY hard time accessing it. I worked and worked trying to unscrew that bolt, but I just couldn’t get a good “grip” on it with the pliers (or wrench? Whatever. I don’t know this stuff…lol) I owned. I went to Ace Hardware and bought smaller pair that would more easily be able to fit into the small crevice of a crack to access the bolt. But it STILL didn’t work. I couldn’t grip the bolt tight enough to actually loosen it. It wasn’t working.

After a long time, I was feeling defeated. I had this mirror 99% removed and only one single bolt stood in my way of replacing it. How could the video make it look so easy?

I watched the video again and again. I must’ve watched it near 50 times that day. Finally, it hit me. As I watched the guy effortlessly loosening the bolt I realized…..he’s accessing it from above!!!

I was standing, so I was more-or-less the same height as the bolt (it was about chest-level with me). I ran inside and grabbed a chair. Ran back out to the garage and used the chair to elevate my position. Now, I was looking down at the bolt from above. I was much more easily able to slip in and I FINALLY made the concrete connection that was needed. I jimmied it a bit and finally the bolt started to loosen. Once it was off, the entire mirror was able to easily detach. I slipped the new mirror into place and it could NOT have been any easier! There was a plug I just plugged in, lined the bolts up in place, and then re-tightened them all. It worked like a charm!

Bye bye, old & busted mirror held together by tape for far too long: 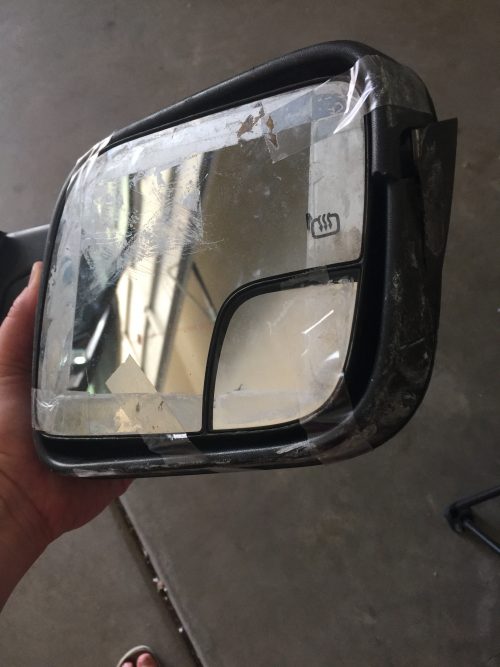 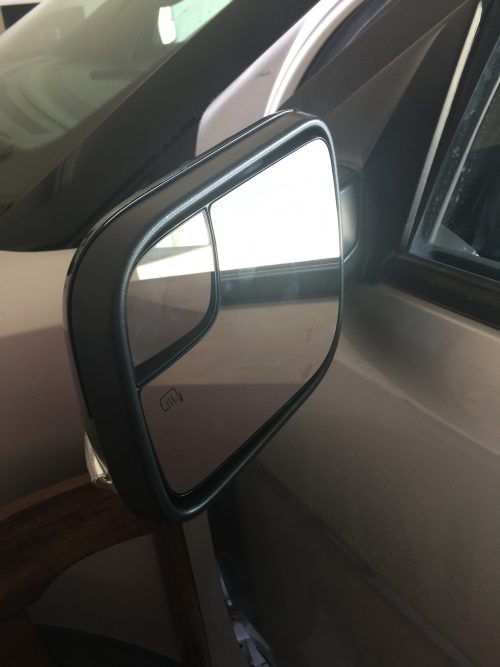 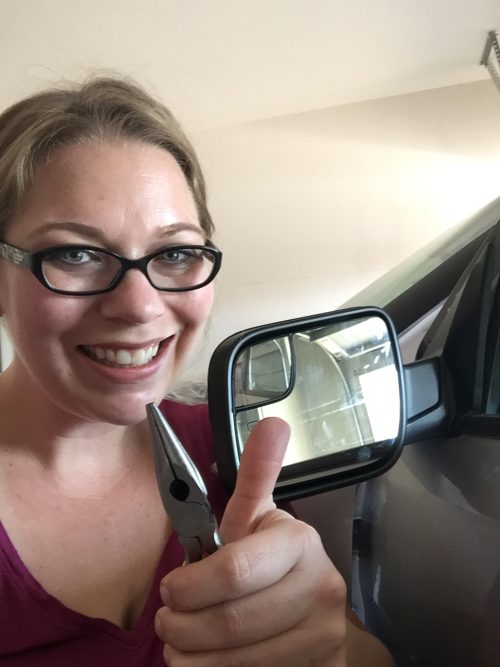 Those are pliers, right? I’m telling you – it’s a miracle I was able to do this! lol

Friends, it’s been a long time since I’ve felt such an overwhelming sense of accomplishment! I mean, I was riding this wave of satisfaction and pride all weekend (I’m still pretty proud writing about it now, too)!

Another “win” for the Single Woman, and the frugal woman, too.