Remember when I made my own homemade yogurt in a crockpot and made the bold declaration, “I’m Never Going Back!”

Well, it turns out I lied. Because I’ve bought a great deal of yogurt in the 2 years since then.

Don’t get me wrong, the homemade yogurt was DELICIOUS and significantly cheaper than store-bought varieties.

But it also took forever and was kind of a pain to babysit all day in the crockpot. I did make several batches, but the habit didn’t stick.

This weekend, though, I tried the new-age version of crockpot yogurt. I introduce you to Instant Pot Yogurt! 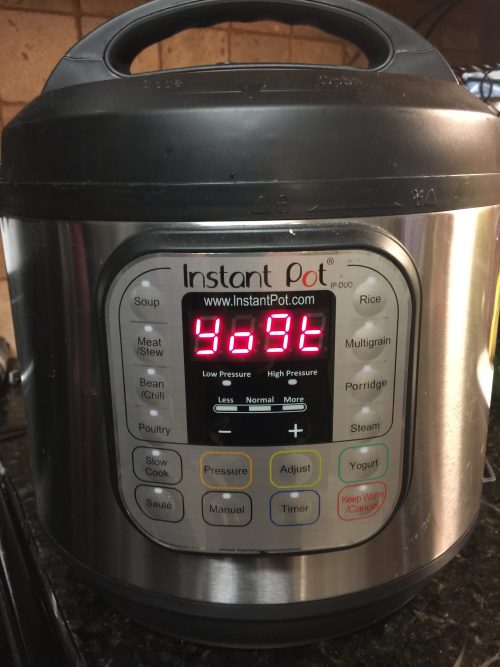 My mom got me an Instant Pot

this last Christmas and I honestly haven’t used it nearly as often as I’d thought I would. The whole idea of cooking using pressure is cool in theory (cook from frozen in 30 minutes!), but it still takes awhile to come up to pressure (and release pressure after cooking), and I haven’t fallen in love with it as some others have.

But even so, I’ve been looking for ways to save money on our grocery bill and thought I could likely use the Instant Pot to make some homemade yogurt. Faster than the crock-pot method, less counter space used, and still the same great end result product!

I followed this recipe and had great results. I’ve reposted the recipe below (with my comments and modifications):

Start with a cool cooking pot. Pour milk into instant pot and cover with lid (note: it’s not going to be cooked under pressure, so the lid can be removed at anytime but keeping it covered helps the milk warm up faster).

Press the yogurt button and adjust until the screen reads “boil.” Whisk the milk occasionally while the heat kicks up. You must get your yogurt to at least 180 degrees (I usually aim for a few degrees higher). It took me two complete boil cycles for mine to get hot enough.

When the boil cycle is done the pot will beep and you can check the temp. Once you hit the magic number of 180, get the cooking pot out of the instant pot and soak in an ice bath in the kitchen sink. Continue to whisk the milk occasionally so it cools evenly. You want it to cool to 95-100 degrees.

Once the milk cools to 95-100 degrees, remove a cup and mix it together with a yogurt “starter.” This can be from previous homemade yogurt or store bought. The best yogurt to use is plain with nothing added. Just live yogurt cultures and milk. I used a 2% plain yogurt variety from Chobani.

After the cup of milk and yogurt starter are thoroughly combined, pour all back into the instant pot and recover with a lid. At this point, you want to let the yogurt sit for about 10 hours. Less time (8ish hours) will result in a milder taste and longer time (12ish hours) will result in a tarter taste. I made my yogurt so it would rest overnight so it was right about 8 hours.

Push the yogurt button on the Instant Pot again until it displays 8:00 (8 hours). You can adjust the time, if desired.

After the pot beeps that the incubation period is complete, use a glass cover or plastic wrap to seal the pot and put it in the refrigerator to cool (about 6-8 hours).

At the point, the yogurt should be thick enough for a spoon to stick in it! 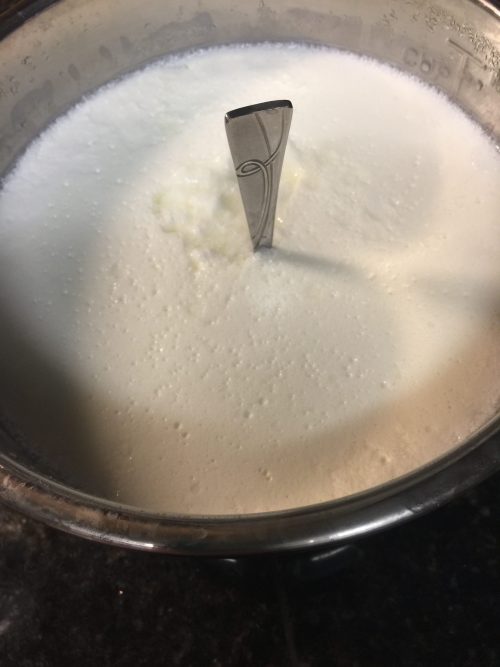 Scoop out to store (I store mine in glass Ball jars in the refrigerator).

Or scoop into a bowl, top with fruit and granola, and enjoy! 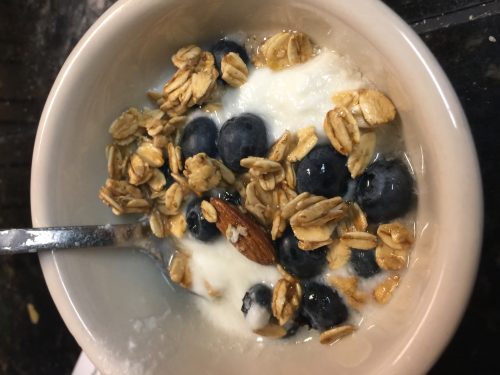 I also like to make smaller batches with fruit. I’ll muddle some strawberries, add some lemon juice and sugar, and blend into the yogurt. If I do that, I try to eat the yogurt the same day because I don’t have any preservatives in the fruit mixture (so don’t, for example, make a giant batch of strawberry yogurt to last a week because the strawberries will start to go bad!). The plain yogurt should store for at least 2 weeks as-is.

To get Greek-stye yogurt, just strain once or twice using a cheesecloth. Voila!

Makes a great breakfast, snack, or side! I’ve been sending some for a lunch side-dish for my kids by putting into the little portion-sized containers (like these

for example) and including a spoon in the lunch box. They LOVE the homemade yogurt and gobble it up! It’s a win all around!

Does anyone else make their own homemade yogurt?

Mypaperwriter.com – paper writing service.
Stop your struggle and visit Thesishelpers.com to get thesis help.
When there’s no time, Assignmentgeek.com will help with homework.