Hi friends! I’m happy to announce that I’ve officially signed the deal and will have a full time job starting July 13th! 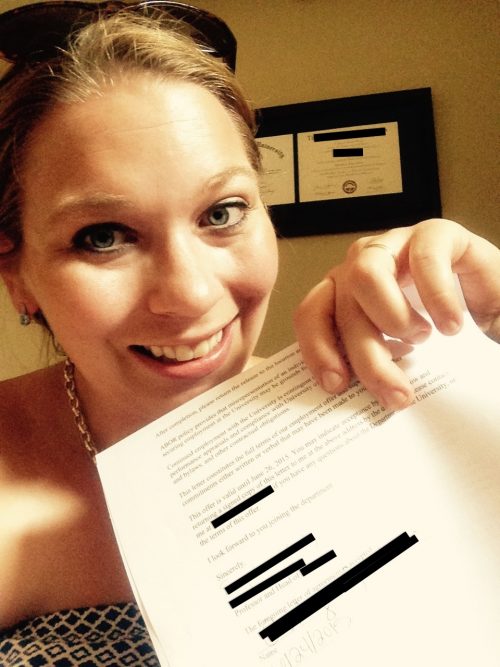 Yikes, that’s sneaking up quick! I’ve signed a short-term 1 month contract to work on course preparation from mid-July through mid-August. Then my full-time contract (where the benefits kick in) begins mid-August. Not a lot of time between now and then to tend to things such as: moving girls to full time preschool, buying some work-appropriate attire (I’ll sure miss lounging in my yoga pants all day!), and any other household odds and ends that need to be wrapped up before beginning full-time employment.

I had a handful of commenters ask me to expand on what, exactly, this job is. I’ve mentioned a couple different jobs and I think people were getting confused so I’ll take a moment to give some additional details.

So where are we at?

I’ve officially accepted job #1. Taking job #1 meant that job #2 was out. There is still a possibility I could apply for (and eventually be offered) job #3 for next year, but I’m pretty unsure about it at this point. With all the family turmoil going on, I don’t like the idea of having to move my family cross-country, have my hubs find a new job (or re-start his business in a new state), and basically start all over again. I like the stability of staying where we currently live and starting to really put down roots. I’m also having a hard time with the actual job descriptions. In my mind, I’d always really wanted a tenure-track position. But now that I’m facing a different option, I’m realizing how excited I am about it. I’ve always loved project management (I have some experience with that in the past), and that’s basically what the online coordination is, but on a larger level. Instead of “project” management its “program” management. Also, research is stressful. I still like it and I often incorporate it into my lectures (and I love teaching!), but do I really love research? I don’t know. If given the option, I think I’d select the administrative side (i.e., online program coordination) over the research side. In terms of long-term growth, I also see additional opportunities for the administrative side. Online programs:  it’s the way of the future! Getting this experience early on could help me have a competitive edge over others in the future and maybe, just maybe, land me an awesome position back by family at some point. The big downside is the lack of tenure, itself. Tenure is the best job security in the world! But I don’t worry about it too much. I think my work will speak for itself and I’ll make myself an indispensable asset of the program. So hopefully I’ll have job-security that way.

I have so much more I want to say and some advice I’d like to gather from readers regarding retirement options, but I’m out of time now so that will have to wait until Monday.

Thanks for your encouragement and support along the way. I’m still a little nervous about the transition back into full-time employment (this will be my first full-time position in the past 3 years since my kids were born), but I’m also very excited for this next chapter of our lives and the implications for our debt reduction!