Mexican food is one of my all-time faves (comes with the territory of growing up in Texas and currently living in Arizona…I’ve always been very close to the border!)

It tends to be cheap, quick and easy to make, and delicious!

So I just wanted to peek in today with a quick tip on cheap taco seasoning.

I mentioned a couple months ago that I buy Taco Seasoning from Costco because its so cheap and I had several commenters mention that they make their own for pennies compared to the store bought stuff. So feast your eyes on this photo…. 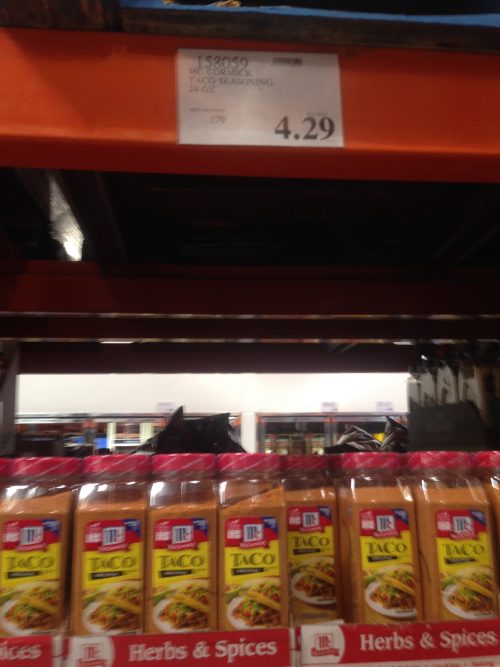 To make my own, the very cheapest seasonings I could find were $1 per 2oz. container. So even if I made my own taco seasoning mix (by buying garlic, chili pepper, etc. and mixing everything together), I’m still coming out way ahead by just buying the Costco taco seasoning.

Those of you who make your own….do you find seasonings somewhere cheaper? Grow (and dehydrate) your own? Other secrets I don’t know about?

If not, then you might be better off just picking it up from Costco, too.

But if I’m wrong and you actually do have taco seasoning cheaper somehow, please let me know in the comments!