Seems intuitive, right? But if you are honest with yourself, think about how easy it is to let food go to waste.

Example 1:  You buy a bunch of veggies, forget about them while they’re in the crisper, and only use half before the other half goes bad and gets tossed.

Example 2:  You buy a pizza, which comes with packets of parmesan cheese and red pepper. You only use half the packets and throw the other half away.

There are so many ways that we let food go to waste. Because so much of our budget is allocated toward food products (in the form of groceries and eating out),  when I started blogging here I really wanted to make a conscious effort to cut down on any and all forms of food waste!

In the case of Example 1 (above), if I discover that we have fruits or veggies nearing the end of their shelf life, I make a conscious effort to use them! They’re easy to toss into smoothies (I like to make fruit & veggie smoothies, so I might toss in a browning banana and/or some wilting spinach or lettuce….lots of options, so think outside the box!). I also try to incorporate them into meals. If we simply can’t find a way to eat them before they are going to go bad then I will wash and pre-chop them and throw them in the freezer!

In the case of Example 2, I have started saving any/all condiments that come with food from restaurants (side note:  obviously we’re trying to reduce our eating out, but we do have a budget for it, so if it fits in your budget then why not stretch it for all its worth?). For pizza, I have saved the packets of parmesan and red pepper flakes. I find its easy to end up having them thrown away, so I’ll open them (1 by 1) and dump them into our container of parmesan or container of red pepper flakes (which we already have anyway). I have done the same thing with salsas from a local Mexcian food restaurant. They have a red salsa and a green salsa. The red salsa gets dumped right into our regular salsa container: 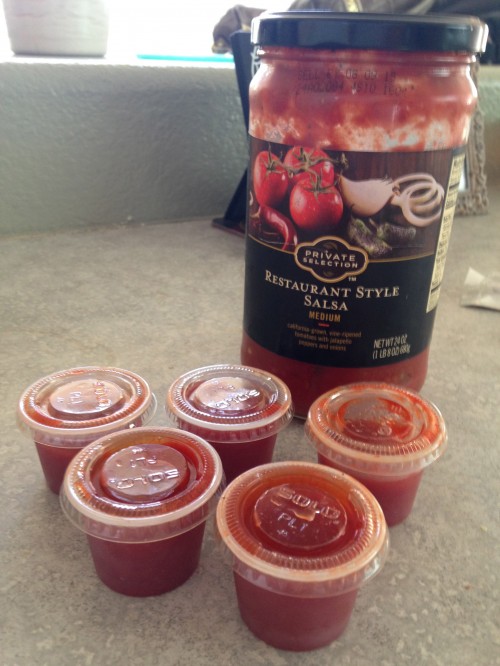 And I will dump the green salsas into a leftover baby food jar (the girls no longer eat baby food, but I always saved their old jars for uses just like this!) 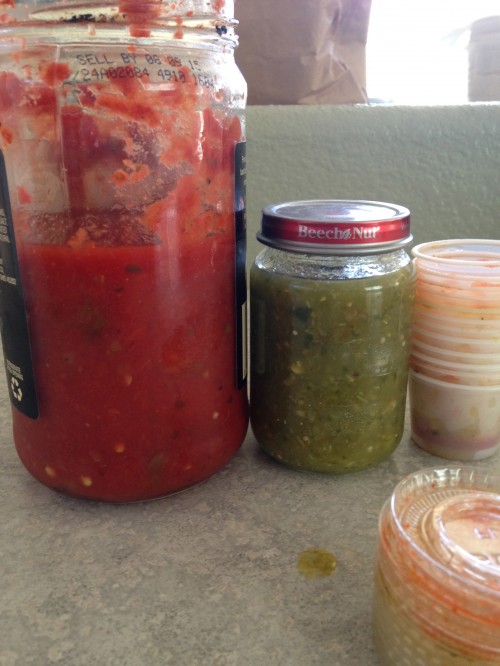 Then I can use them for homemade Mexican food feasts!

I recently did the same exact thing with some small containers of hot mustard and chili oil that came with some Chinese we had bought. The hot mustard was emptied into our spicy brown mustard bottle and I actually have a container of home-made hot chili oil (its just regular EVOO and red pepper flakes) that I made in an old oil bottle (which I repurposed after the oil was gone). So, I dumped the Chinese’s hot chili oil into our container at home.

I realize that a lot of this has to do with eating-out stuff and (again), we’re trying to minimize our amount of eating out. But if you’re going to eat out and you get condiments like this – you might as well put them to use instead of throwing away!!!

(also, side-note…..I didn’t save the little portion containers you see in the pictures, but it occurs to me that I could have and re-used them for things like salad dressing for days I plan to eat “at the office”…..I work from home currently, but this is something I totally would’ve done in the past!)

This is super common and I’m sure everyone knows about it already. But we have saved so much money lately on hand soap just by buying a big bulk bottle of it and refilling smaller bottles instead of buying new ones every time we run out. 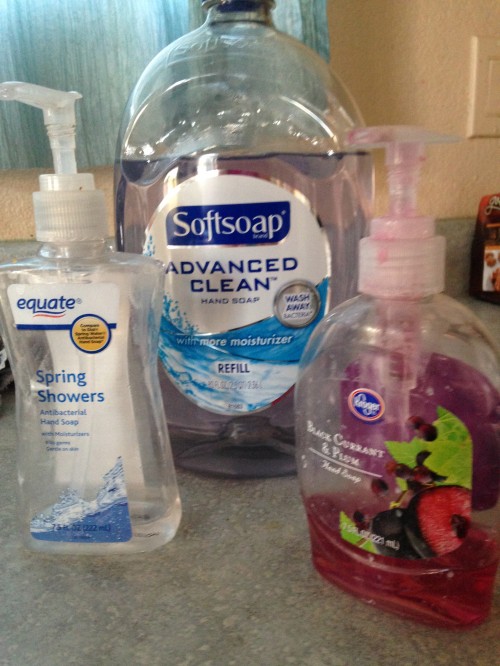 Hope had posted awhile back about how she has given up her soda addiction in an effort to save money (Go, Hope!) We aren’t big soda drinkers but every once in awhile it slips into our grocery cart. More regularly, though, money has been spent on fruit juices (which is even more expensive than soda, particularly since I always buy the “all natural” kind). You know what’s way cheaper than fruit juice???? Water….with fruit in it!!! 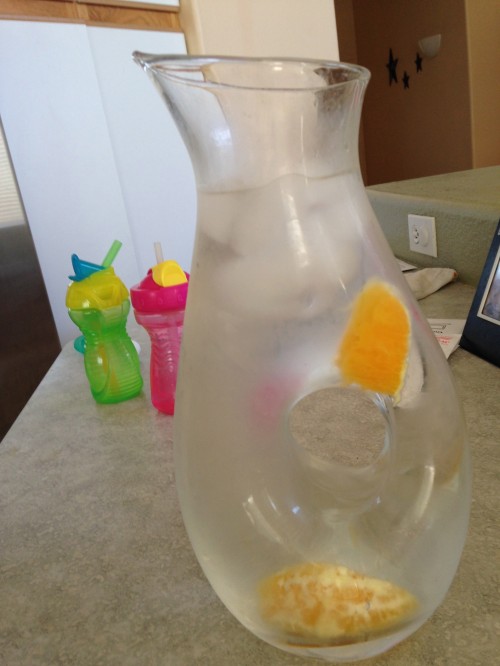 I’ve gotten into the habit of filling up this pitcher daily with water and adding some fruit to it to lightly flavor the water. Some days its a squeeze of a lemon or lime (both currently “in season” and cheap). I’ve also done it with slices of strawberry, slices of orange (shown here), and even slices of watermelon. You can also mix and match flavors! One of my favorites is strawberry-cucumber.

If you stick to “in season” fruits/veggies/herbs (I’ve heard lemon-rosemary water is good), or if you grow your own then its so, so, so inexpensive! And its much more “fun” and enticing than “plain” water. Plus, this has encouraged me to drink more water, in general, which is a good healthy habit to have. You can see the girls’ sippy cups in the back. They’ve gotten into the fruit-flavored water “craze” too! : )

How have you been saving money lately?